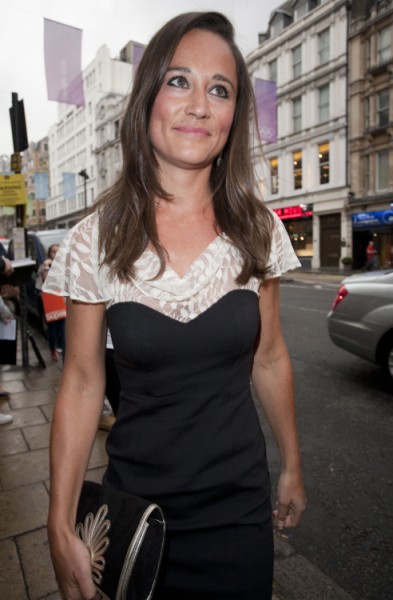 Oh, so now I get it. So this is why Pippa Middleton turned down all those American talk show offers. I figured Queen Elizabeth  just told Princess Pippa to have a coke and a smile but she sweetened the deal by throwing her a job too. Very good your majesty. Very good indeed.

Well… sort of. This morning the Royal Household’s website advertised for an Events Coordinator. The position involves the planning and coordination of Royal Household events at all residences in the UK, official or private, or on special occasions abroad. It’s 40 hours a week and pays around $40,000 a year.

Ah hells to the no! You know Pippa’s not going to join the help and you know she’s not going to start working full-time. Whitney! Pippa’s whole mission in life is to be a part of the royal parties, not to plan them. That’s what plebs do and Pippa is no pleb.

I love how the Daily Mail addressed Pippa’s party planning experience by saying she was the mastermind behind disco balls in the thrown room for Kate Middleton and Prince William’s evening reception. Please…. disco balls… hardly Freddy Mercury-inspired. I can only imagine Elton John’s eye rolling. I really need John Goodman to pop up here and scream, “Donny, you’re out of your element!”

But still… Pippa’s been a team player. She shut down promotions for her party planning book, essentially killing it before it had a chance to make waves during the holiday gift season. So the Queen has to throw her a bone in some way. Well, actually the Queen doesn’t have to do shit but she’s been good to those middle class Middletons and Pippa has managed to keep her top on which is an unexpected plus. So maybe she’ll come in as an adviser to the Events Coordinator? Oh, yes, that’s much better. Pippa could totally live with being the consultant or adviser to the Queen. This way she’s an idea man and not lugging swatches and hanging disco balls while Harry stands under the ladder checking to get a peak of her underwear. The working Middleton girl could definitely get  down with that. This is not the lady-in-waiting bullsh-t Pippa passed on after the wedding. This is kind of like being the Queen’s right hand man. Pretty soon Pippa will be sitting in on the secret meetings between the Prime Minister and the monarch and it’s only a matter of time before she’s invited for Christmas at Sandringham. See? This is where Pippa’s mind goes. Everything thinks Waity Katie was all about the forward thinking but Pippa’s learned from the best. Who needs to promote a book? What book? It was just a stepping stone.

Do you believe the royal family is offering Pippa Middleton a job to keep her from launching her own career in America? What is Pippa eyeing in return?