Queen Latifa Lesbian Bombshell – Coming Out Of The Closet On TV! 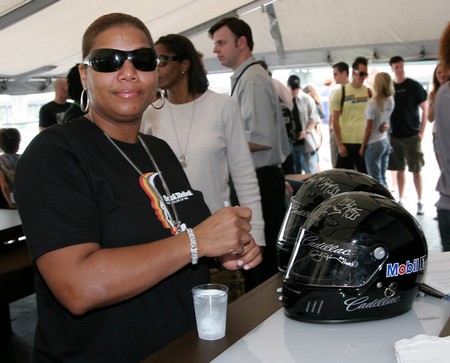 I guess when you’re such a famous, talented celebrity it’s hard to work in time to tell the world who you really are! Oh, wait. Nix on the “talented” part. Fans and observers of Queen Latifah have long wondered if the sassy, in your face actress has been keeping part of her identity under wraps. The CoverGirl spokeswoman just landed her own TV show, cleverly titled The Queen Latifah Show, which will premier next fall. And what’s the plan to get the ratings up? A source explains the show “will feature celebrity interviews, human interest stories, comedy, pop culture, and musical performances. It will also feature Latifah talking about her life, something she’s never done before.”  The star has always been pretty mum on her personal life, which does nothing to help quell the rumours.

Queen Latifah has been attached to several women romantically, notably personal trainer Jeanette Jenkins, who dumped her after a cheating scandal. The source promises that Queen Latifah will “open up, and her official announcement (coming out) will no doubt have fans glued to their TV screens. It will be impossible for her to do a daily talk show and not address the issue of her sexuality. She just wants to do it in her own way, on her own show!”

Honestly, I think that it’s time for Queen Latifah to speak out. If she’s gay, great. A lot of celebrities have come out of the closet just to help fans who are struggling with various sexual identities. If she isn’t gay, then she can continue to support LGBTQ events, like the festival in Long Beach, CA last May. Whatever she identifies as, she owes it to fans to be true to herself and set a strong example. Hiding something like that isn’t perceived as being private in the press, it’s seen as fear or shame.  Did someone just say ‘JOE SIMPSON?’ I just wish she weren’t using her TV show as a platform for this. Do we really need another crappy daytime talk show?