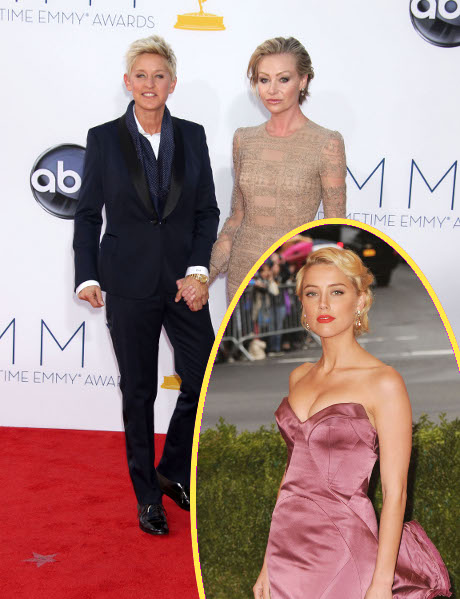 Everybody is in love with Ellen DeGeneres, and now it seems that Amber Heard has her eyes set on the hilarious funnywoman, which isn’t making Ellen’s wife, Portia de Rossi, all too happy. In fact, it has her in a jealous rage of sorts. Perhaps Portia has something to be worried about. Amber Heard is, after all, the sneaky lady who supposedly caused Johnny Depp‘s romance with Vanessa Paradis to crumble in an unfortunate split. Maybe Amber Heard is out to form another tumultuous love triangle!

“A lot of women openly flirt with Ellen and try to hit on her, which drives Portia nuts.”  So when Portia found out Amber had been calling and texting Ellen, asking for advice on real estate and becoming a vegan, she hit the roof!

“Amber admires Ellen a lot and considers her a role model,” adds the source.  “She suggested the two meet up for lunch or coffee, but Portia made it clear to Ellen that if they do get together, she’s gonna be there too!”

Ellen, 54, and Portia, 39, started dating eight years ago and tied the knot in August 2008.  Amber, 26, had had an on/off romance with Los Angeles-based artist/photographer Tasya Van Ree, 36, for the past four years and even dated Portia’s ex Francesca Gregorioni, the 44-year-old stepdaughter of Ringo Starr.

“Ellen is considered the ‘perfect catch’ in the lesbian community, although she’s happily married to Portia,” adds the insider. “That’s why Portia wants to keep a close eye on any gal hoping to get chummy with Ellen.”

What do you think about this story? Do you think Amber Heard is out to steal Ellen away from Portia? Let us know in the comments section below. I think it’s probably pretty clear that we’re all on Team Ellen/Portia, but do you think Portia is just acting a bit paranoid? It’s safe to say that Portia and Ellen are a solid couple, and it’s hard to imagine them going anywhere anytime soon.