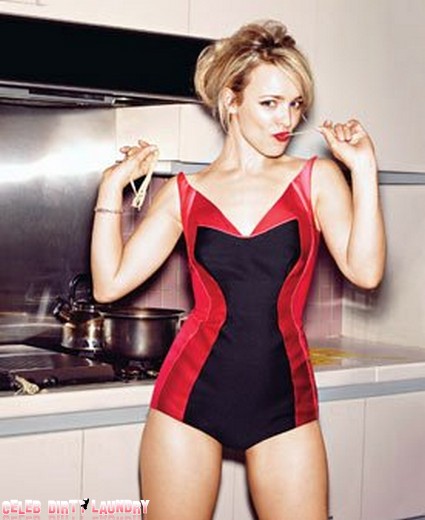 Rachel McAdams is looking super sexy in the February edition of Glamour Magazine. The 33 year old star of Midnight In Paris wears some short shorts in the photo shoot. She’s also smouldering on the cover.

Inside she opens up about her famous crushes ‘I loved soap operas when I was young, so Antonio Sabato Jr. and Maurice Benard from General Hospital. And who could forget Josh Brolin in The Goonies?’

On her foray into fast food at McDonalds ‘Yeah, for a good three years. My sister and brother worked there. My sister was my manager! It was a great place to work, but I had a little bit of an OCD thing with hand washing and just didn’t have time. They were like, “Hey, the drive-thru’s backing up. Stop washing your hands!” I was not a great employee; I broke the orange juice machine one day.’

She also debates whether it’s easier to play the funny girl or the straight girl ‘I think playing silly. I’m very silly as a person, but quality silliness on-screen has more of an art to it. Harrison Ford, whom I was in Morning Glory with, has mastered that dry funny better than anyone.’

And what would she be doing if the whole acting thing hadn’t worked out “I wouldn’t mind running a restaurant. I’m not an amazing cook, but I can follow a recipe.”

I think it’s fair to say acting is working out for the Canadian. Her last movie Sherlock Holmes: A Game of Shadows topped the US Box Office.  She’s also looking very loved up with fellow actor Michael Sheen. They’ve been a couple since 2010.