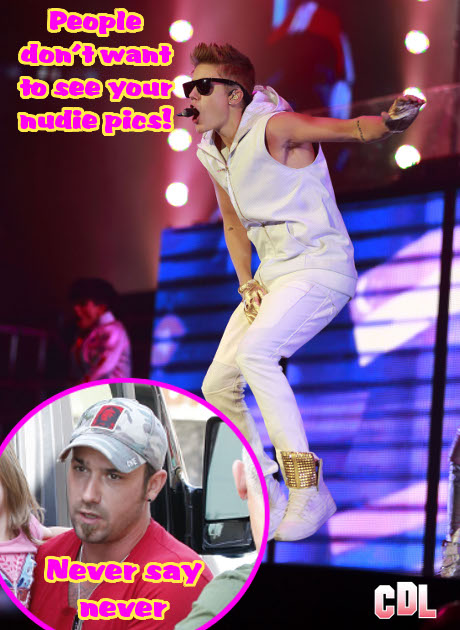 Scandalosity follows Justin Bieber like a dog on a trail of bacon. Now, word has gotten out that Justin Bieber’s dad, Jeremy Bieber, has a very special set of photos that are making their rounds through the industry and currently being shopped for a very pretty penny. The pictures, which allegedly depict a young Jeremy Bieber baring all in full frontal nude poses, have not been seen by anybody; however, if they are real, then you can bet your lil’ rear they’ll be out in the public before you know it.

A source exclusively tells our buddies over at Radar Online that “Jeremy was purposely posing in all the photos, and he’s completely naked showing full-frontal.” The source continues, “They look like they were taken for a Playgirl-type magazine or something.”

The source tells the publication that they are unsure whether or not a deal has been reached yet, but they were certain that deals were in negotiations. Poor Justin! He’s been blamed for grabbing his junk in his own nude photos; being sued by a ridiculous crazy claiming that he gave Selena Gomez an STD and stole his credit card to purchase penis enlargement drugs; and now he may or may not have a scandalous, cheeky father to deal with. The life of a celebrity.

What do you think about the Jeremy Bieber naked photos being potentially released? Do you care at all?

Let’s just get this straight, Jeremy Bieber hasn’t really done anything special — and he is, by our standards, not even a celebrity. However, because he’s the father of Justin Bieber, these photos will sell. And they’ll sell for some major moolah. And people will look at them. And then everybody and their brother will want to interview him. And then Jeremy may or may not get his own TV show. If, erm, the photos exist.