Rashida Jones Demands John Travolta Come Out Of The Closet 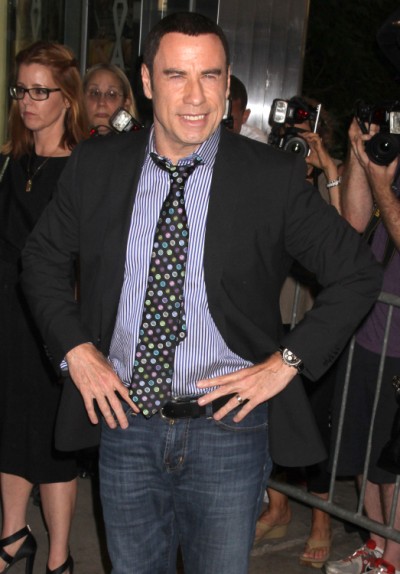 John Travolta has had more disgruntled masseurs call him out for his not so heterosexual proclivities than he has natural hairs on his head but he’s always maintained his innocence and everyone has pretty much lived with the fact that you can poke fun at John Travolta’s lifestyle but just not too hard or too loud. Well, Parks and Recreation star, Rashida Jones, didn’t get the memo. In a interview with SpinningPlatters.com, she urged Travolta to explode on out of that closet and show the world he’s proud to be gay. Radar Online reports:

Rashida was publicizing her movie Celeste and Jesse Forever when the conversation turned to her obsession with Frank Ocean who came out of the closet, earlier this year.

Her writing partner and former boyfriend Will McCormack said: “There needs to be, like, a professional athlete that comes out.”

That’s when Rashida jumped in saying: “And a movie star! It’s time…Like John Travolta? Come out! Come on. How many masseurs have to come forward? Let’s do this.”

OK, now I know I probably haven’t been the most empathetic towards Travolta in the past but I have to tell Rashida to have a coke and smile and shut the f-ck up on this one. If Travolta thought he was gay that would be different, but I’m not so sure he does. Scientology convinces you of interesting things. But that’s besides the point to me. If a dude wants to get happy endings from masseurs every waking moment to pass the time, then so be it. Who are you to out him in such a public forum as a fellow celebrity? What about John Travolta makes Rashida think he wants to be the poster child for a gay lifestyle?

So what’s the difference between Rashinda saying it and gossip sites like us inferring it. A LOT. We write gossip. We entertain and, as of right now, don’t have as large a platform as Rashida. Call me a hypocrite. I don’t care. I think her comments were totally off sides and rude. I get she was trying to be funny, and I know Travolta’s name has become synonymous with closet living, but I just feel her comments were too much. The dude has issues and he might be a sexual predator but I just feel so bad for him! Should I? Probably not! But have you seen that spray on hair product he’s been using lately? Johnny boy can’t admit he’s bald, how the hell do you think he’s going to admit he’s gay? And why just pick on him? Rashida went for the easy target but there are TONS of closet homosexual actors in Hollywood and we only know a small percentage. Why do their names stay hidden? Probably because Rashida’s friends with them.

I’m not so much bashing Rashida’s idea as how she went about expressing it. Of course it would be lovely if men felt more comfortable to come out in Hollywood but they don’t. It sucks but it does mess with their livelihoods, just ask Rupert Everett. Travolta already has enough fame and money to last a lifetime but he’s obviously worried about his legacy. Would coming out ruin that? I don’t know and he doesn’t know either which is why he hasn’t done it and probably never will.

But now the idea I had of Rashida (which is she’s a spoiled rich kid who probably only went to an Ivy league school and got movie roles because her dad is Quincy Jones) is reinforced. I can’t help it. I’ve always gotten that vibe from her. She’s got that uppity Natalie Portman style of talking that grates my nerves sometimes. And I think I’ve never warmed to her because the first time I was introduced to her she was the other woman in the Jim and Pam triangle on The Office. That stuff sticks with you!

If you want someone to come out of the closet, you don’t mean girl them into doing it. Damn her for making me defend John Travolta!

What do you think about Rashida’s statement? Was it harmless? Is she just saying what everyone’s thinking or do her remarks come across insensitive and callous? I don’t know why this bothers me so much but it just does!