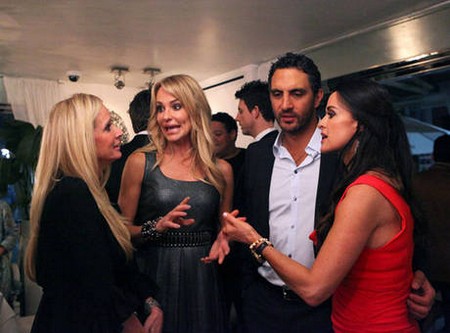 Did you catch the season premiere of The Real Housewives of Beverly Hills last week?  If so then you already know that this season is starting off with several of the ladies already at odds. I think much of the simmering fury began at last seasons’ reunion show and some things just weren’t even discussed let alone worked out before the new season began filming. That’s great for us because now we’ll get to watch the ladies work out a whole bunch of kinks right off the bat.

This week’s episode has everyone attending a garden party that puts the rift between Brandi Glanville and Taylor Armstrong on full display. Things first got ugly between these two at the reunion show when Brandi called Taylor on her attention seeking behavior. It was a few months after Taylor’s husband, Russell had committed suicide and her behavior had been quite erratic. Brandi basically called her on it and said a lot of the things that everyone else was thinking. That’s just what Brandi does, she walks into a room and confirms what we viewers are thinking.  Since their verbal smackdown Taylor has climbed onto her FemBot pedestal and now refuses to even acknowledge that Brandi exists.

The situation comes to a head at the garden party when Taylor goes down the line talking to everyone and quite obviously skips right over Brandi, fully ignoring her. I happen to like Brandi because she is the most real of this bunch, but I wouldn’t want to piss her off and that’s exactly what Taylor has done. Tune in on Monday night to see how Brandi reacts to Taylor’s snub!  I’m betting it’s not really going to be pretty!