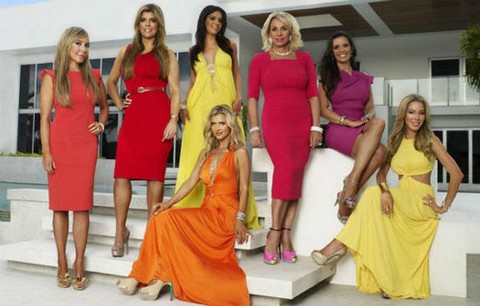 The ladies cast trip to Bimini is just getting started and this Thursday we’ll get to see the second part of their adventure. If you tuned in for the first part last week then you saw lots of fluff about Adriana Du Moura’s luggage and of course Elsa Patton predicted the obvious- that this trip wasn’t going to go smoothly at all! Well, of course not- half of these women can’t stand the sight of each other and they fight over who is the fakest, usually while lining up their next plastic surgery appointment!

Anyway, while in the Bahamas, Alexia Echevarria stumbles onto an interesting nugget that will inevitably have a crushing affect. One of her writers’ back home has learned that Karent Sierra’s boyfriend, Rudolfo Jiminez is screwing around with a 24-year old Mexican actress named Ana Belena. There is a published article as well as photos of the two having a heavy duty make-out session as evidence and so Alexia clues in the rest of the ladies.

At this point most of them believe that Karent and Rudolfo’s relationship is completely fake and for Bravo’s television cameras anyway, so they figure Karent won’t have much of a reaction. Instead girlfriend refuses to look at the proof and insists it’s just not true. They ladies pretty quickly realize that at least on her end, the relationship was real and that their kinda sorta friend has been cheated on, something they all can relate to.

Karent insists that it can’t be true but later has a full emotional breakdown once alone. This weeks’ episode will pick up with Karent stuck in paradise absolutely devastated. To add insult to injury she gets word that her 80-year old father is having a medical crisis and there are no flights off the island until the next day. Karent is now an absolute wreck in bed as Lea Black, Lisa Hocstein and Joanna Krupa try to console her. Tune in on Thursday to see how the mounting drama will unfold!