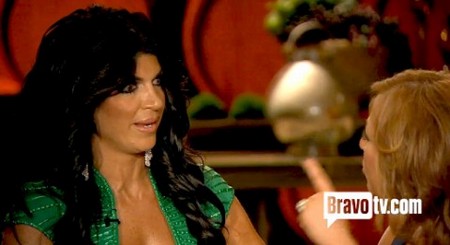 Part two of the Teresa Giudice Massacre is coming to you this weekend as Bravo airs The Real Housewives of New Jersey season 4 Reunion part 2 on Sunday. This week’s episode picks up right where Rosie left off, after eloquently declaring, “….I’ll rip her head off!”  I can tell you that everyone gets out alive but you better believe that both Teresa and her husband, Joe Giudice are both in the hot seat.

Remember that phone call Joe made to a woman that sparked controversy and raised eyebrows? The one where he called his wife a c*nt? Well, Andy Cohen is going to grill him about that. Also, after being attacked by Teresa, Jacqueline Laurita decides that anything goes and tables the topic of Joe’s chronic infidelity. According to Teresa’s former bestie, Joe has banged everyone from the babysitter to his secretary and Teresa looked to Jacqueline for advice because Joe is such a whorebag.

Teresa’s denials look anything but honest and you know Joe’s typical demeanor about everything- he grunts, grumbles and then throws in a “Who cares, who gives a f*ck. Shut up about it already.”

The most logical statement seems to come from Caroline Manzo, who some seem to think is a bully. I disagree with her being a bully; it’s more like she says what others think. Anyway, she reminds Teresa that this is 15 minutes of fame, that’s it and when it ends Teresa will be completely alone because of the way she has treated everyone. She has managed to alienate everyone and truly, who would want to even admit to even having a cup of coffee with the self proclaimed Jersey Princess?

Obviously there is a dump truck load of accusations that will be dumped in viewers’ laps on Sunday and once again, we’ll get to sort through the muck and form our own conclusions. After last week’s lynching of Teresa and her stooping lower than we’ve ever seen before- do you think there’s any redeeming her?  Tell us your thoughts in the comments below!