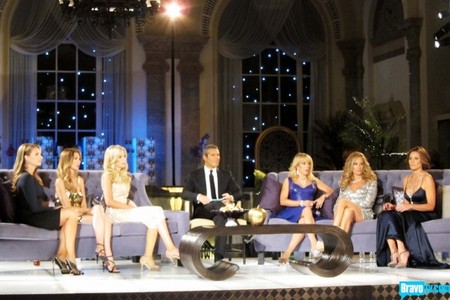 After a semi-slow start it turned into one hell of a crazy ride for the ladies of The Real Housewive’s of NYC and starting on Monday night Bravo will show their reunion chat with Andy Cohen. The ladies gathered at the Museum of American Finance to discuss their first season together as Bravolebrities.

Ramona Singer, everyone’s very favorite housewife lush will no doubt come under a ton of fire for her bad behavior- especially while on the island of St. Bart’s. She and Sonja Morgan partied hard and fought like crazy with Aviva Drescher for a good chunk of the season. Expect that ongoing three-way feud to be revisited.

Perhaps a little surprising is the ladies need to confront Carole Radziwell!  She seems to be by far the nicest of the bunch and very much the mediator of the group. However when she was sitting for individual interviews she had no problem speaking her mind and the other ladies didn’t really appreciate her candor!  According to LuAnn deLesseps they often had absolutely no idea that Carole was unhappy with a situation until they watched her side commentary along with the rest of the world!

Aviva’s ex-husband Harry becomes a surprising hot topic. He also screwed Sonja Morgan, a fact that was sort of lost over the course of the season. Since Aviva and Sonja hate each other at this point Harry is just another thing to throw down over!  I also have to expect Aviva to come under fire from all sides. The ladies were all quite fed up with her need to constantly be the center of attention, either by starting drama or talking non-stop about her weaker points.  Check out the clips below to get a glimpse of what’s in store for fans on Monday night!  Did you tune in this season?  Who was your favorite housewife? Tell us in the comments below!