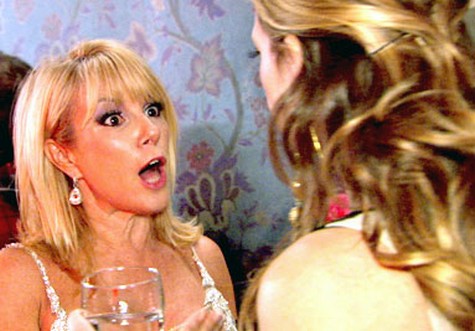 Tonight on Bravo is an all new episode of the Real Housewives of New York called “All’s Well That Doesn’t End Well.” On tonight’s after kicking Aviva’s 80-year old father out of her charity event, tensions reach an all-time high between Ramona and Aviva. Ramona and Sonja claim they come bearing peace but rouse tensions yet again, this time at Heather’s charity event. If you missed last week’s show called “Don’t Make Room For Daddy” there is a full and detailed recap HERE for you!

On last week’s show Aviva’s father, George, was back in town and she took him to her favorite health food store where George picked up some unusual items. Sonja continued to be disappointed by her ex-husband and after much negotiation of a settlement, she realized she was ready to take further legal action. Aviva and LuAnn joined Heather for a walk through at the location of Heather’s upcoming Yummie fashion show. To Aviva’s surprise, Heather had a special request for her.

On tonight’s show a night of charity turns into a night of chaos as Ramona throws an event for domestic violence victims and while Aviva is a no-show, her father, George, goes in her absence and tries to demand an apology from Ramona. Sonja and Heather try to put the finishing touches on Sonja’s toaster oven box and the winning look takes the team by surprise. Aviva meets with Heather for her fitting and is hesitant with the look that is chosen.

Ramona and Sonja are at it again and this time they make a scene at Heather’s charity event. Finally, it is a night of confrontation at Carole’s book party as Heather confronts Ramona for ruining her charity event and Ramona and Aviva’s disagreement comes to a boiling point.

Tonight’s episode begins with the cast all gathered together for a ping pong charity tournament pulled together by Carole to benefit her dead husband’s HBO documentaries division. Aviva and Ramona are of course taking swipes at each other at a distance. Sonja has yet to engage in the nitpicking because she’d rather shake her leather clad ass and call attention to herself.

After the game ends Aviva holds court at a table slamming Ramona. Heather tells her point blank that she no longer wants to have to discuss Ramona every time that they are sitting together. Aviva agrees to cool it but you know as well as I do that Aviva loves the drama.

Heather has a final meeting with Sonja over the whole Sonja Home toaster oven campaign. It has been an ugly and tedious process and Sonja has truly not appreciated the amount of work that Heather has done. Thankfully, Sonja loves the final product which is good considering she has her whole lifestyle riding on it. If Sonja doesn’t make money she’ll lose her home. Thankfully Sonja leaves right before Aviva arrives to go over fashion choices with Heather. She’s going to walk in one of Heather’s shows wearing nothing but a teddy, meaning her prosthetic leg is on full display. After a you-go-girl pep talk from Heather and her staff, Aviva agrees to do it. Heather wants her charity show to be absolutely perfect and is running on adrenalin. Here comes the drama. Aviva doesn’t want to wear a jacket over the teddy and she wants her hair down. Heather insists that she blend in and continue the continuity of the show.  Heather is finally getting pissed because Aviva is relentless in her demands.

Ramona arrives to the show absolutely thrilled that Aviva is walking because then she won’t be near her. Once Sonja arrives she and Ramona talk over the live violinist which pisses everyone off. Right before hitting the runway, Aviva ditches the jacket. Does Aviva EVER do what is asked of her? I’m thinking no. She does as she pleases all the time and gets away with it.

Sonja, after praising Heather to her face, decides to back stab her at the charity event. She vilifies the help that Heather gave her with the toaster oven shoot and starts badmouthing her to Heather’s staff. The two pretty quickly begin fighting because Heather doesn’t put up with the nonsense that Sonja slings.

It’s a night of parties here I guess because now we move on to Carole’s little bash and it’s there that Heather cuts into Ramona. I’m baffled by the friendship of Ramona and Sonja. They are so tight but the minute you split them up they both backpedal and blame the other for the bad behavior that comes out when they’re together. Ramona’s husband attempts to systematically grill Aviva but Ramona keeps butting in telling him not to talk to the devil. On the other side of the room Heather explains to Sonja that her biggest problem is her nonstop sense of entitlement. Screaming is coming from separate sides of this supposedly upscale event. Aviva wants an apology from Ramona for throwing her sex addict out of yet another party and it’s something all of the ladies seem to want to see happen. Ramona is finding herself backed into a wall here and I have to wonder if Sonja will have her back or join the majority.

The season ends with Ramona declaring Aviva possessed. Sonja is still waiting for that settlement from her ex and there is no toaster oven. Heather is taking care of her business and trying to avoid drama. LuAnn is letting fate decide her future with Jacques. I think that’s code for it’s about over. Aviva’s biggest goal is to take baby steps towards conquering her phobias. Last but not least, Carole’s latest book is coming to television and she is now the official girlfriend to that guy (Russell) in the band Journey.

See you next week for our Live Recap!