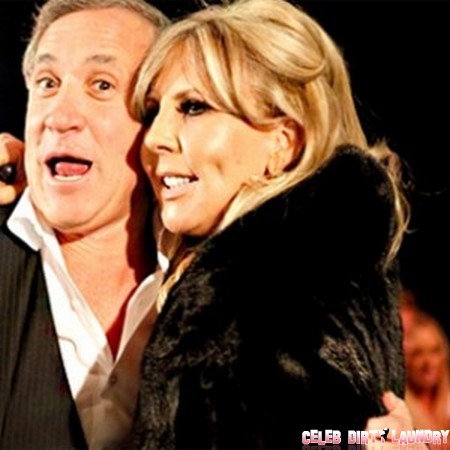 The excitement didn’t last for Real Housewives of Orange County’s Vicki Gunvalson over her fur coat. She wore the coat proudly on part one of the season finale. Her boyfriend and opportunist Brooks Ayers bought it for her. Vicki shoved it in people’s faces who doubted the star’s boyfriend had money.

PETA sent Vicki a letter and some videos explaining they types of abuse that goes on at a fur farm where animals are treated badly and killed for there furs. Vicki is now back stepping and apologetic for even wearing the fur coat. Vicki is now encouraging other people to donate their furs to PETA.  They have a set up for people to do this so they can give the furs to homeless people to stay warm. That way, the animals haven’t died for nothing.  Wonder if the animals agree?

Vicki said that watching the videos was very disturbing. She says she will never where fur again and its not something she ever wanted or liked. Wow – that’s kind of bad the only gift you ever get from your dead beat boyfriend is a fur coat you can’t wear. People for the Ethical Treatment of Animals better known as PETA has always tried to educate stars on the way animals are treated.

I have no clue where Vicki was hiding not to know this everyone knows wearing fur is a no-no especially when you are a celebrity. At least the 50 year old reality star is in the know now. Maybe Vicki will be on the new ads for PETA as lots of TV stars have done this.

Kim Kardashian was spotted last week wearing controversial  boots made of python skin – she’s a repeat offender that PETA is not too happy with.