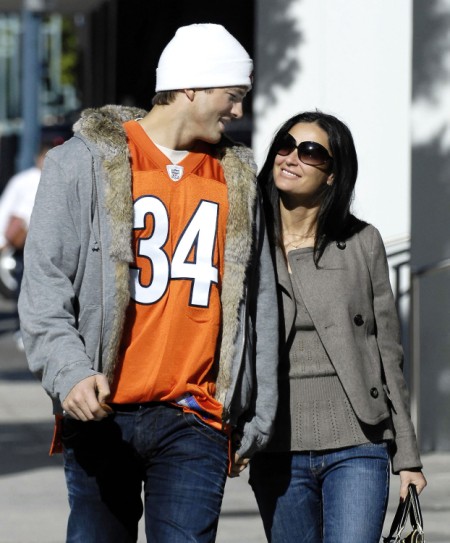 Demi Moore and Ashton Kutcher may have reunited at a recent party last week but sources say that wasn’t the first time the couple have met up since splitting last year.

We reported Demi and Ashton had an emotional encounter during their friend Rabbi Yehuda Berg’s birthday party, but apparently the couple had already decided to rethink their relationship status thanks to the help of a spiritual advisor.

“They have met up to discuss where to go next,” a source told Radaronline.com “Whether it be to divorce, or if there is a journey to travel together….they both feel it’s important to have spiritual guidance to accomplish it I know they met up with Rabbi around the time of the Gemini New Moon last Monday, it signifies a time of new beginnings, especially when it comes to communication, so they met again before the party, at least once, maybe twice. The idea was to discuss, where do they go from here. They’re by no means getting back together but equally no decision has been made to end things for good so everything is to play at this stage.”

But the signs do look like they are pointing that the couple are willing to give it another shot. At the birthday party, Ashton lamented all the “horrible” mistakes he made in the past year and Demi’s been active on twitter again spouting off about forgiveness and the like.

But I approve of this news, not because they are necessarily getting back together, but because the couple is taking it slow. Demi was hurt really bad and looked like she was making strides to getting her groove back by changing her twitter name and going to rehab. I applaud her for not running back into Ashton’s contrite arms just because he says he wants to try again. She has to make him work for it so she knows he really wants her and isn’t just bored or lonely. He’s young so he’s entitled to make douchebag mistakes but she doesn’t get the pass. You get burned once Demi, shame on him; you get burned twice, shame on you.