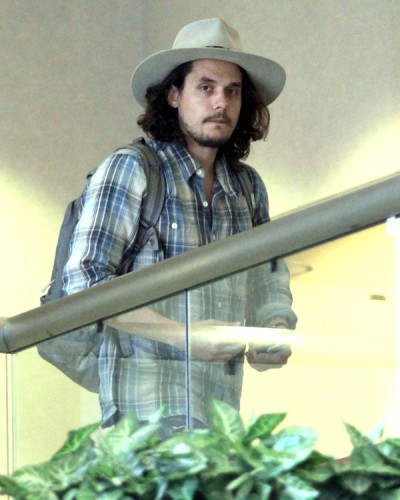 John Mayer escorted Jennifer Lawrence and friends to Medieval Times over the weekend and sources say the renaissance fair-loving man only had eyes for his Hunger Games wench. I wish this would explain why he’s been dressing like a depression-era hobo lately, but sadly it doesn’t.

RadarOnline.com’s sources say Jennifer ate up Mayer’s romeo shtick but I refuse to buy it! “It was almost like she was a little nervous being around him. She kept giggling and covering her mouth. It was cute,” the source said. “And John was eyeing up Jennifer like he was a dog and she was a juicy pork chop! When he lays on the charm he lays it on real thick!”

First of all, they were at Medieval Times, so if anything she was a turkey leg. Have you ever had one of those? Ridiculously delicious. Anyway, Jennifer was taught how to run properly during her Hunger Games preparations so she should start kicking it into high gear. RUN! I don’t care how hurt Mayer’s feelings are over Taylor Swift, he needs to keep his finger-picking hands away from my Jennifer. She’s dating Nicholas Hoult and they are the cutest couple ALIVE. I’m not gonna lie, I listened to Your Body is a Wonderland on repeat during my entire sophomore year in college, but that’s not enough for me to give John the clearance to scam over Nicholas.

To my utter relief, John and Jennifer went in different directions at the end of the night. I’m not too worried over this news. Jennifer giggles. Have you seen her do late-night shows? She’s as goofy as Kristen Stewart is awkward. And they were at Medieval Times, which is bad ass by the way, so she was probably drinking and laughing at court jester John’s attention-seeking antics.

But that wasn’t the only time there were caught hanging together. A source spotted them out with Zoey Deschanel in LA and John was all about her then too! “John could hardly take his eyes off Jennifer. It looked like he was totally smitten! At one point he was walking along behind her and massaging her shoulders.”

Ahh! I could totally see John pulling the creepy massage on the shoulders move!

Why are they hanging out? They don’t seem like they’d have much in common, right? I think Jennifer’s nice though and always ready to have a good time. I won’t restrict her friends. John just better watch his hands or beastly Nicholas will have to get all X-Men on his ass.

Despite my obvious protestations, do you think Jennifer and John would make a hot couple? It’s OK, you can say yes if you want!