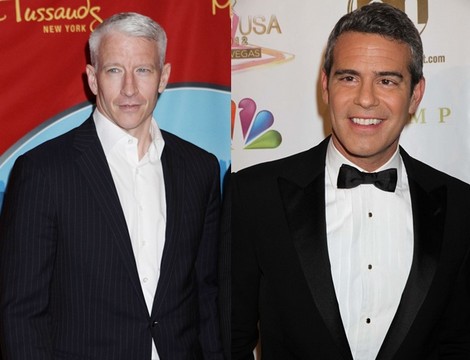 Anderson Cooper’s unfaithful lover, Ben Maisani, was caught kissing a mystery date recently in NYC’s Central Park.  We reported on Celeb Dirty Laundry at the time that The Daily Mail posted images of Maisani kissing an ‘unidentified’ brunette and the internet exploded in a flurry of rumours and finger pointing. Maisani and Cooper were planning to get married as soon as Labor Day, in a lavish New York wedding ceremony.

Well that was then and this is now – and according to that erstwhile new source, The National Enquirer, Anderson is getting cozy with a new fellow.  It seems that Bravo TV executive Andy Cohen could be the person to fill the hole in Anderson’s aching heart.   Allegedly, Andy has been trying to steal debonair Anderson since at least July 2011.  Andy is quite the production guru claiming credit for being the ‘genius’ behind the ‘Real Housewives’ franchise.  While Andy might not be as handsome as unfaithful Ben he is probably a whole lot smarter.  The question is whether Anderson goes for beauty or brains?  We’ll bet that it’s beauty.

The National Enquirer Print Edition, September 3rd reports: Devastated by his boyfriend’s cheating, Anderson Cooper has turned to just the right guy to cheer him up and heal his broken heart – witty Bravo honcho Andy Cohen.  And Andy couldn’t be more delighted.  The gay TV exec has a long-term ‘man crush’ on Anderson, say sources.

“Right now Andy knows that all Anderson needs is a friend to be there for him, but he hopes that in time there could be more,” declared an insider. “Anderson’s always liked Andy because he’s a little outrageous at times.”

“Live-wire Andy is the perfect person to cheer him up,” said the insider. “And Andy’s hoping Anderson’s next move is directly into his arms.”

So will Anderson Cooper and Andy Cohen hook up and form a true Hollywood power couple?  You always hear nonsense about supposed Hollywood power couples – my favorite example of the clichéd term’s misuse is when it is applied to Jennifer Aniston and Justin Theroux.  Jennifer Aniston has about as much power (and talent) as a worn out D-cell battery and Justin’s power began and ended with David Lynch.

In any case, let’s see what happens with Anderson’s love life.  Just because Ben cheated does not mean that Anderson will dump him.  Love conquers all – especially good sense and proper judgement.  My bet is that we haven’t seen the end of the relationship between Anderson and bad-boy Ben. What do you think?