Report: Angelina Jolie Is Chain-Smoking, Drinking, And Bursting Into Tears 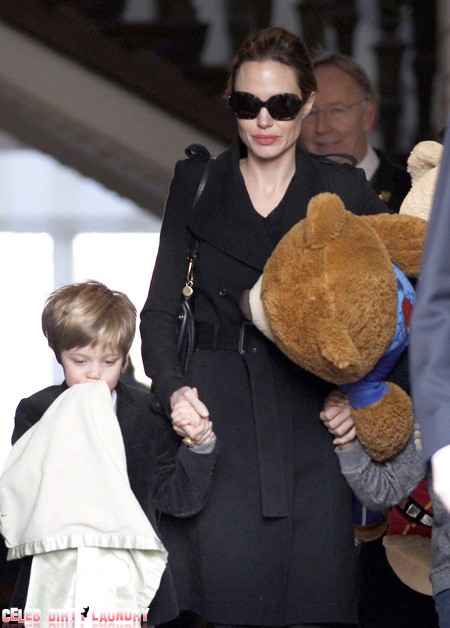 It seems that recent criticism of Angelina Jolie has sent the insecure celeb on crying jags and has her smoking cigarettes and drinking to the point of drunkenness.  Apparently producers of her new movie, Maleficent, are concerned that Angelina’s gaunt appearance and new chain-smoking habit do not auger well.  A Hollywood source told In Touch Print Edition, March 26, that what set Angelina off was the negative reaction to now infamous leg-thrust pose on Oscar night.

An insider revealed to In Touch that a stressed-out Angelina has taking to smoking instead of eating as a response to the negative criticism.

‘She always stinks of smoke,’ said the source.  According to a pal Angelina ‘is all sharp bones and it hurts Brad when they hug.”

The Hollywood insider said that while Angelina might put on an insouciant exterior she is in fact very insecure.  When people ridiculed the ‘look-at-me’ pose she struck while presenting the screen-writing Oscars, she simply fell apart.

The source said: ‘She’s still mortified.’  ‘She had this cool aloof persona – and she messed it up.’

Angelina’s decline began immediately after the Oscars with an episode of drunkenness.  Angelina had six glasses of red wine at an after-party at Craig’s Restaurant and an eyewitness claims that she had to be practically carried out to the car by Brad Pitt.  George Clooney, Stacey Keibler and Brad were onlookers at the sad fiasco.

Brad wants Angelina to grow up and get over her embarrassment for the children’s sake.  A friend says:  “He feels like she’s setting a bad example with her weird behavior and eating habits.  He is concerned that Shiloh and Zahara could end up unhealthy like her.”

This is not the first time that Angelina has been accused of being anorexic and on the verge of collapse.  Recently she was accused of being 98 pounds, heading to rehab AND PREGNANT – all at once!

Facts are that Angelina is such as huge star that anything she does – or does not do – will lead to sensational tabloid stories.  In any case, this is the territory that comes with celebrity!