Angelina Jolie Is Pregnant, Weighs 98 Pounds, And Is Headed For Rehab (Photo) 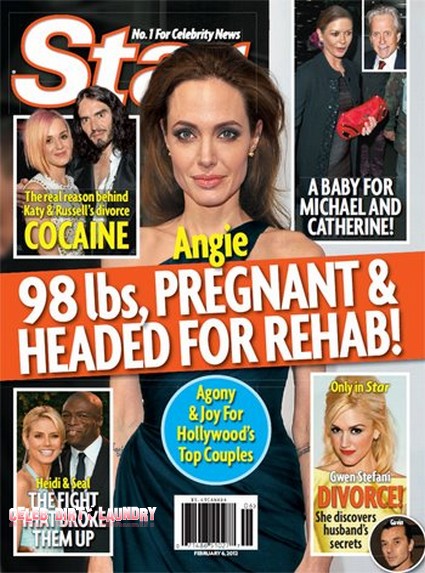 The cover of this week’s Star mag contradicts what we saw of Angelina Jolie at the Golden Globes. In widely released photos taken at the event Anelina posed with Brad Pitt and looked simply marvelous – a veritable picture of health and beauty. But the same people who were right on when they were the first to reveal that Mariah Yeater had accused Justin Bieber of being her baby daddy now claim Angelina is both pregnant and a mess – headed for rehab! Well I guess Star can’t be correct all of the time!

One has to question Star’s assertions especially because their sister publication, RadarOnline, wrote just 3 days ago that Angelina was the picture of health and happiness:

Brad Pitt and Angelina Jolie didn’t take home away statuettes for their work Saturday night, but they could have been easily won the award for Most Glamorous Couple at the 2012 Producers Guild Awards.

Angelina looked happier than ever.  Of course when you are the top of the A-list like Angelina has been for years, it is difficult not to be the subject of rumors. Pregnancy rumors swirled around Angelina last week after she said: “I could end up pregnant” when asked whether she and Brad would add to their brood.

Last week OK wrote:  “A source close to the Oscar-winner reveals that Angelina is expecting her seventh child and telling friends she can’t wait to be a mom again. “She’s almost three months along,” the source confirms to OK!. “It’s not something she wants to officially announce but she’s at a point where she is telling a select group of people.” Adds an insider: Angelina is really savoring every moment. she’s having a tough time with morning sickness but says it’s all worth it.”

Back in November talk was that Angelina was desperate to be skinny – as if she was ever NOT skinny?

At that time Life&Style claimed that Brad was frantic and begging a stressed out and frail Angelina to stop starving herself. We have seen this story 100 times on different magazine covers, old and recycled news. Angelina denied the rumors that she is starving and/or anorexic. She claimed that she is just naturally thin.

Is Angelina pregnant? Does she weigh 98 pounds? Is she heading to rehab like Demi Moore? We doubt these rumors but we know form experience that what begins as supposedly unfounded gossip often winds up as factual news.