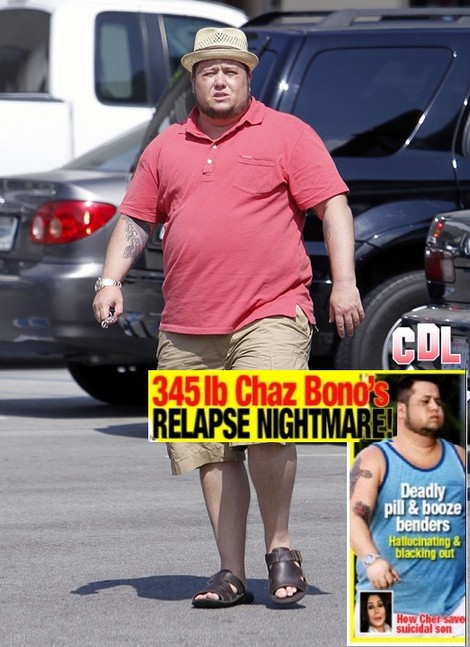 It looks like Chaz Bono’s life is completely imploding once again. Cher’s transgender son is reportedly not doing so well after splitting with fiancée, Jennifer Elia.  In dealing with the breakup his weight has soared to 345 pounds and he appears to have relapsed big time on both the booze and pills that have plagued him in the past.  According to the latest issue of The National Enquirer, the benders have gotten so bad that Chaz has been hallucinating and blacking out.

The troubled star seemed to begin backsliding after his two year relationship with Jennifer ended last Christmas.  At the time a friend told The Huffington Post, “Relationships are not easy,” a friend of Bono’s tells me. “Add on top of that, when this couple started this relationship they were both women — and now one is a man. Add to that, they both have had substance issues and a lot of personal problems they needed to figure out.”

Ironically, at the time it was rumored that the love affair ended because Jennifer couldn’t stay sober and Chaz wouldn’t risk his own sobriety.  It looks like his own demons were eating away at him until he couldn’t handle the pressure without going back to his old crutches.

According to The National Enquirer, Cher is scrambling to try and save her suicidal son.  Do you think she’ll be able to help him in time or are we looking at another overdose in the making?  Tell us your thoughts in the comments below!