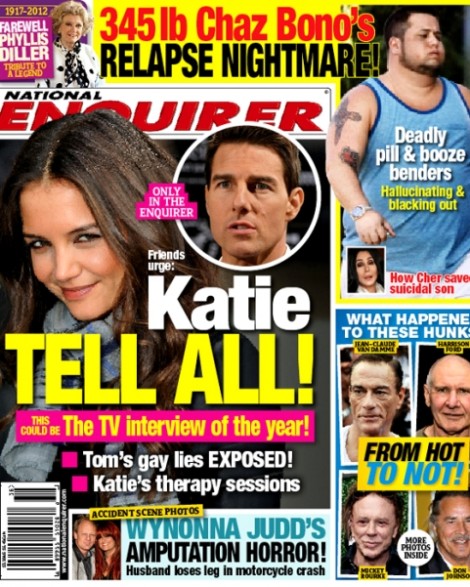 The National Enquirer isn’t done milking the Tom Cruise/Katie Holmes divorce. Officially, the former power couple is dunzo, but the fallout is still in full effect. This week’s Enquirer cover story reveals that Katie’s friends are encouraging her to finally speak out about her ill-fated marriage to the Mission Impossible star and set the record straight on why she hightailed it out of there so fast.

The gossip magazine insists that if Katie decided to sit down it would indeed be the TV interview of the year. Who do you think she’d talk to? Katie Couric? Oprah? It’s no secret Oprah needs the ratings but she’s tight with Tom. Couch jumping incident aside, she has his back. I don’t know if she’d let Katie dish all his dirty secrets on her watch because the Enquirer insists they would blow the roof right off Tom’s head! Kate could expose Tom’s gay secrets? I thought the South Park dudes already did that? I guess there’s more and it must be juicy because Kate’s been hitting up the psychiatrist’s couch as well and undergoing marathon therapy sessions. I thought she was referring to her therapist as a life coach. Whatever it’s called, I’m not sure if the sessions are working if Katie still feels the need to divulge her secrets to the world. Tom must have left a pretty large load on her shoulders! I can’t help myself. I’m intrigued. You?

In other news, Chaz Bono is relapsing! I’ve seen plenty of pics recently of Cher’s son rocking to Subway and the gym but the Enquirer alleges he’s relapsed and suicidal. His fluctuating weight is back up to 345 pounds and Cher is worried. He should have been an all-star on Dancing with the Stars! I miss Chaz! Hopefully Cher can slap some sense into him. I wonder if he’s out of whack because he broke up with long-time girlfriend, Jenny Elia. I’ll have to read to find out. Poor Chaz. I feel for the guy!

What do you think of the National Enquirer this week? Are you interested in the new crop of stories? I’m a sucker for all things Cher so I’m hooked! But I also want to check out what Katie’s friends are encouraging her to spill. I still think Tom backed out of that custody battle too fast. She must have something on him but why play her card so soon? Something’s up!