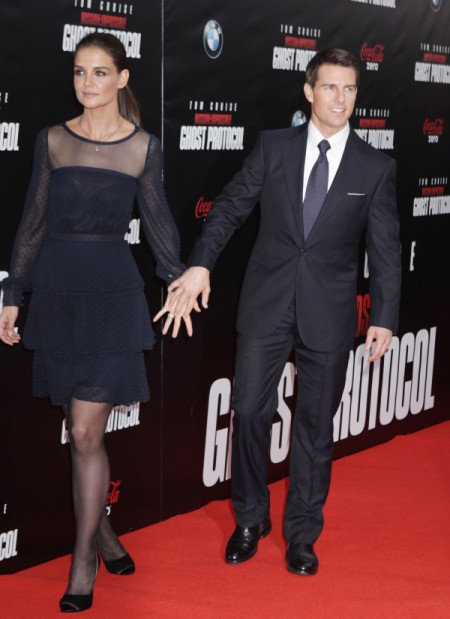 In a shocking, timely turn of events, Katie Holmes and Tom Cruise’s divorce has been settled. Katie Holmes’ lawyer, Jonathan Wolfe, told TMZ, “This case has been settled and the agreement has been signed. We are thrilled for Katie and her family and are excited to watch as she embarks on the next chapter of her life.”

TMZ reported that lawyers from both camps participated in a “marathon negotiation” over the weekend to settle the dispute as quickly as possible.

Can you believe this all happened so fast?? They just vowed to work together, I didn’t think they meant so soon. Everyone assumed the divorce and custody battle were going to drag out for months as Tom and Katie fought over how to raise Suri Cruise. Wolfe also said, “We thank Tom’s counsel for their professionalism and diligence that helped bring about this speedy resolution.”

I bet. I’m sure everyone told Tom to just sign the papers and be done. He was taking a beating in the court of public opinion and Scientology was going down with him. Apparently Tom settled for “meaningful, significant” contact with six-year-old Suri.

Interesting… but what do you think that means? Katie told the world she wouldn’t settle for anything less than Suri out of Scientology and living with her the majority of the time. Suri would not follow the same road Nicole Kidman’s kids traveled. I’m assuming Katie won Suri and the right to keep her out of the religion. Crazy! Can you believe little Joey Potter took on the most powerful (and highest paid) actor in Hollywood and WON? Because that’s just what happened. Scientology isn’t the type of religion that shares custody. You’re either in or you’re out and I’m gathering that Suri won’t be getting audited any time soon.

Are you just as surprised as I am? Do you think Tom and Katie agreed to settle so quickly for the sake of Suri or was Tom pressured into it by his Scientology friends who were tired of getting raked over the coals?