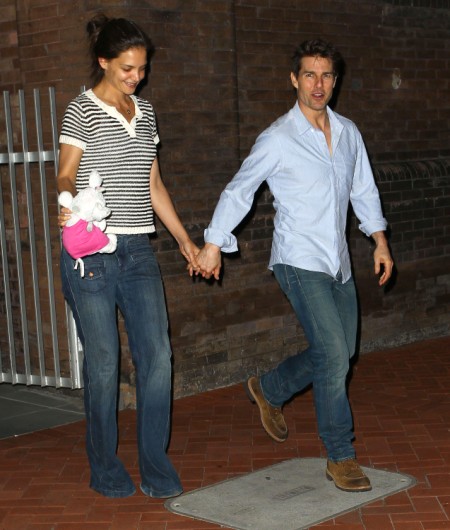 Tom Cruise and Katie Holmes squashed rumors of a bitter divorce and custody battle today when they released a joint statement declaring their wishes to work together during this trying time and keep their personal lives private.

Reps for both camps said:

“We are committed to working together as parents to accomplish what is in our daughter Suri’s best interests,” the couple told E! News this morning in a statement released through their reps. “We want to keep matters affecting our family private and express our respect for each other’s commitment to each of our respective beliefs and support each other’s roles as parents.”

This is very interesting. I wonder what Tom had to do to get Katie to agree to this statement. On the surface it seems pretty normal. Most celebrity couples release things like this after they announce a split, but instead Katie declared war on Tom and Scientology because she assumed Tom was going to steal her daughter away and brainwash her like Tom’s Scientology cronies did to Nicole Kidman’s kids.

Tom was losing battle after battle though. He must have thought it was only a matter of time before he lost the war. CDL already reported that it was in Tom’s best interest to settle fast. Do you think his Scientology buddies encouraged this detente? It’s no secret, the church has been in the middle of its own little sh-t storm ever since Katie allegedly left Tom to keep Suri Cruise out of the religion. Something went down and we’ll hear about it soon. Katie was winning. The public was firmly behind her. She wouldn’t give that upper hand up unless Tom caved.

Do you believe Tom would actually give Surie to Katie? Will they agree on joint custody if it means Katie can raise the child away from Scientology?