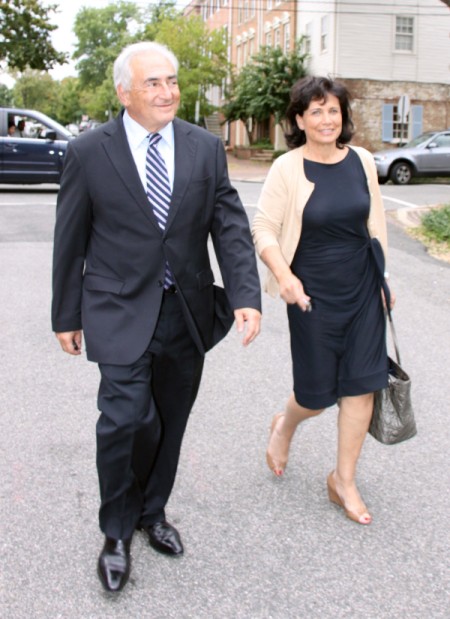 After twenty years of marriage and international headline-grabbing rape accusations from a hotel maid, Anne Sinclair has finally thrown Former International Monetary Fund chief Dominique Strauss-Kahn out of her life.

A source told Closer magazine that Sinclair asked Strauss-Kahn to leave their Parisian home a month ago. Strauss-Kahn is said to be “shattered” and “depressed” by the separation, but it appears to be over for good. “She believed right up to the end, but today, it’s all over between them,” the magazine said.

Strauss-Kahn’s career and name has been marred with disgusting allegations in recent years. He’s most known to Americans for the 2011 rape allegations from a hotel maid. He denied them and criminal charges were later dropped because of the maid, Nafissatou Diallo‘s, credibility. It was astonishing to many that Sinclair stuck by him throughout the entire embarrassing situation. Currently she edits the French version of the Huffington Post so she’s clearly not blind.

But they went home to Paris to face more incriminating evidence of Strauss-Kahn’s lascivious lifestyle. He’s currently under investigation in France for soliciting prostitutes at sex parties in northern France, Paris and Washington in 2010 and 2011. And it gets much worse. Apparently he’s been implicated in a gang rape charge with a prostitute in Washington in 2010. Why does Strauss-Kahn do all his raping in America?

Naturally, the perpetually apologetic millionaire, who once had aspirations to run for president in France, denied knowing the women at the parties were prostitutes. Yes, because high bred woman who run in those circles always expect cash after having sex with you.

This dude is so creepy and gross! Sinclair might have been a dumb ass for sticking by him through the rape scandal, but better late than never. See, Kelly Preston, women can get out of 20-year faithless marriage if they want to.