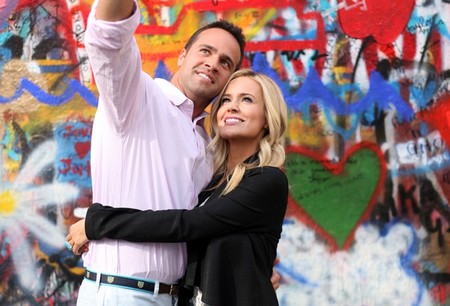 It seems that Emily Maynard is hooking up with Bachelorette host Chris Harrison when the cameras are off! The whispers and rumors continue over on the set of ABC’s the Bachelorette. Emily Maynard has always seemed extremely comfortable with host, Chris Harrison, and it has caused some to wonder what the real story is. The talk picked up momentum when Emily tweeted a picture of the duo together at the Dancing With the Stars Finale.

“I had so much fun with @chrisbharrison tonight @DancingABC ,”the 26-year old blonde gushed, and Chris, 40, quickly retweeted the photo, saying, “Great night with my friend.”

The couple has the kind of chemistry that even other contestants have felt the need to comment on.  “From the beginning, I always said there was no way Emily was really going to end up with one of the guys because she really wanted to be with Chris, and it was obvious he wanted to be with her too,” past winner Vienna Girardi exclusively told Star.

“I vacationed with Chris and his family in St. Lucia and know him well. He was never with his wife. He’s such a flirt. I guarantee Emily and Chris will end up together in the end,” Vienna went on to predict. “If she gets engaged to another man, the show will probably spin it as a love triangle.”

Okay, well even I have to take whatever Vienna says with a grain of salt but, another insider also says, “Chris always openly told staffers that Emily was the most beautiful woman he’d ever laid eyes on.”

Emily and Chris – can you see them together? Do you think it’s even a remote possibility or are these rumors just a good way to throw viewers off from who may have really won Emily’s heart? Tell us what you believe is going on in the comments below!