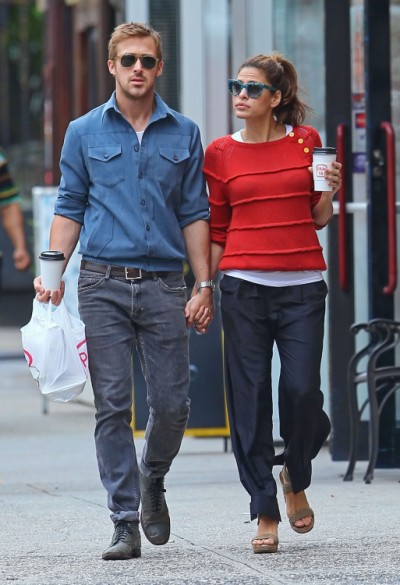 Eva Mendes is itching to make an honest man out of Ryan Gosling. New reports this morning say the actress is ready to finally pop the question to her boyfriend of just under a year.

Cleo Australian came out with the pretty unsubstantiated claims but we just had to dish about it since Ryan Gosling seems to be the boy that every woman in America has staked some sort of claim on! The site didn’t reveal a source or how it even drew the conclusion that Eva was bouncing around on one knee though it did say that “reports are limited” and Eva will probably propose on their one year anniversary next month. The couple met while filming The Place Beyond the Pines.

What’s interesting about this wishful thinking story is that Eva has made some pretty harsh statements about marriage in the past. Apparently she’s referred to it as “boring” and told the Daily Telegraph last year, “If we go back to the origin of marriage, it was very unromantic. It was about land, basically. It was about ownership. So I think it’s a kind of unromantic idea. When I look around and see the emphasis people put on getting married and weddings, I think, wait a second, what does this really mean?”

People always preach that drivel before they get married but somehow end up getting married. I have a feeling the only reason Eva and Ryan aren’t hitched yet is because he’s MUCH younger and MUCH busier than she is and hasn’t gotten around to it yet. Or there’s the other assumption that perhaps he doesn’t want to marry her? I can’t put my finger on it. Ryan likes this girl. He took her to Disney World so it must be love! But you keep hearing that she wants kids bad. She’s 38, so I completely understand, but I guess Ryan has made comments about being pretty traditional in that respect. He won’t get a girl knocked up without a ring on that finger first. So she’s had to wait but her biological clock must be telling her to beat him to the punch.

I don’t know. It could be Friday morning, and I just haven’t had enough coffee yet, but I’m feeling pretty blah about this. True, I’m not the biggest fan of Eva but the couple just doesn’t do anything for me. He’ll be at TIFF so maybe he’ll give us some clues then? That’s not usually Ryan’s style but people tend to get stupid when they’re newly in love and engaged. They want to shout it from the rooftops. Fingers crossed!

Do you think it’s about time Eva and Ryan got engaged or should the actors just enjoy dating for a while longer? Does this couple have what it takes to make it in Hollywood?