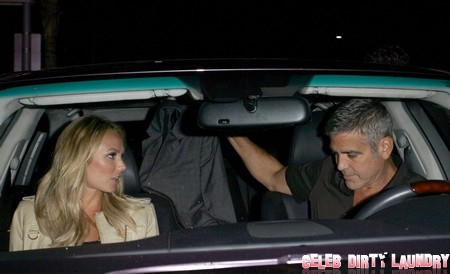 I would love just two minutes with Stacy Keibler, that’s all it would take to point out what is pretty darn obvious to the rest of us – George Clooney never sticks around!  Ever. Look at the trail of size zero, big boobed, bubble headed clones that he dated before you. There is a definite pattern here and the shelf life of any Clooney relationship is under two years. He cruises through the first year with a new woman and after that he gets antsy and backs off. I mean he puts states or even countries between himself and his current clingy, smitten lady love.

Stacy and George were rumored to have split a few weeks back and if you think back, that’s where it always begins when George is done with his girlfriend. First comes the (planted) rumors in the press, then comes a bit of backpedaling and the girlfriend never seems to know quite where she stands in her own relationship. That’s where Stacy is at right now according to The New York Daily News.

“They’re barely talking,” a snitch reveals. “She is worried that he may break up with her any day now.  George is being really distant and pulling away from her,” says our source. “She wakes up every morning and doesn’t know what’s going to happen.”

Stacey is apparently not handling this well at all. She was spotted out at a NYC function last week simply bursting into tears, grief stricken over George. Poor girl just doesn’t know what to do- which is insane.  If you don’t know where you stand in your own relationship, it’s your first big clue that it’s all over with!  Stacy is said to also be concerned about work opportunities drying up if George completely bails on her.

Stacy honey, how about setting yourself apart from the trail of gutted perfectly coiffed chicks George has tossed away, how about YOU pull the plug and then focus on your job and making those opportunities happen for yourself? Unless you prefer to be a pathetic grown woman crying over a man that everyone said would eventually dump you!

Did you see this split coming? Tell us your thoughts on Stacy and George below!