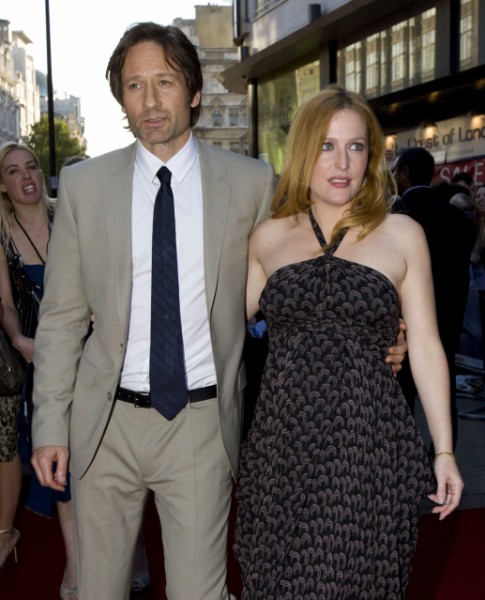 The are they or aren’t they rumors swirling around Gillian Anderson and David Duchovny are getting even more sensational with the news the X-Files co-stars might have gotten hitched right under our very noses!

It was only a month ago when CDL reported that Gillian and David were living together after she announced her separation from boyfriend of six years, Mark Griffiths. But now a source is telling us that they aren’t just shacking up. No, Gillian and David made it official two years ago in Vancouver! “I know they got married in Vancouver two years ago, around august,” the source says, “but those docs must be under seven keys.”

The source also adds that the secretive couple made an appearance at the Soho House Emmy Party Sunday night. I haven’t been able to confirm that. I couldn’t find any pics and no one’s mentioned it which seems strange. There’s a lot of buzz around these two, if they showed up at a party together then somebody would have talked by now, right?

One thing’s for sure though, David’s not talking. Yesterday, Enty Lawyer tweeted about running into Duchovny and asking him about his relationship. “Just ran into David Duchovny outside Ken Paves salon. Asked him point blank about Gillian Anderson. He said ‘no comment.'” Well… that’s not a denial, right?

So does all this add up to a marriage? I don’t know. I can believe Gillian and David are dating. I can get behind neighbors spotting them swimming together at their pad but I don’t know if I’m on the marriage train. How could they get married two years ago and there not be any pictures or whispers? That would be one of the best cover ups in Hollywood history – like Janet Jackson/Rene Elizondo caliber secrecy! I know a lot of us out there want it to be true but we just can’t will a wedding!

But if Gillian and David did get married two years ago that would mean that it happened pretty quickly after he and Tea Leoni divorced. No one can seem to pinpoint when that divorce happened (or if it happened at all) but most seem to think sometime in 2009. If the source’s timeline is correct, is it safe to think David left Tea for Gillian? Is that why they wanted to keep the wedding a secret because it might make Gillian look like a home wrecker? But wasn’t Gillian with Griffiths at that time or were they separated and just waiting to announce? This is such a tangled web! We do know that Gillian was with Griffiths in 2008 because she gave birth to their second child that year. BUT that was also the year The X-Files: I Want to Believe hit theaters so Gillian and David were around each other a lot at that time. Could sparks have been flying?

What do you make of the newest rumors? If Gillian Anderson and David Duchovny married wouldn’t there be some proof? But if we know anything about these two it’s that they’re uber private and not about letting the world in on their relationship. Still… there haven’t been any photos… could the friends really just be friends after all?