Report: Janet Jackson to have a Top Secret Muslim Wedding! 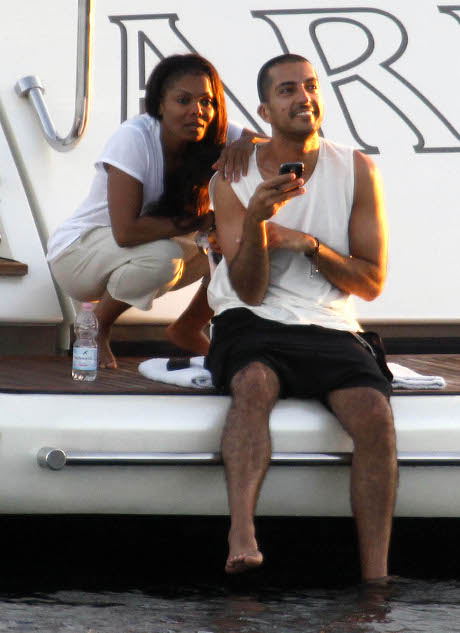 Janet Jackson is reportedly going to marry her wealthy fiance Wissam al Mana in a top secret, $20 million Muslim wedding that will take place in 2013. A renown Turkish author, Adnan Oktar (aka Harun Yahya), is also making the claim that the 46-year-old Janet Jackson has converted to Islam — as did her brother, Michael Jackson — and is choosing to keep her new religion a secret from her fans.

Janet and Wissam allegedly got engaged last year after Wissam, a billionaire whose family has extensive reaches in the real estate and media spheres, proposed to her with a stunning 15 carat diamond ring. The couple met in December of 2009 after Janet gave a special performance in the Middle East and the rest, so it seems, is history. The couple was supposedly shooting for a 2011 wedding, but they ultimately tempered their excitement and chose to hold off for a couple of years so they could have time to plan the festivities.

“They have tenta­tively set a late 2013 wedding date,” says a source for the National Enquirer. “But they are still working out the details and exact day.”

And the wedding isn’t going to be a small one. The couple isn’t going to spare any expense when it comes to the nuptials. They’ve arranged for nearly 500 guests to each be flown in on private jets, and each attendee will receive a week’s worth of food, lodging, and activities. The reception, which is estimated to cost approximately $5 million dollars, will feature the world’s best entertainment — including fancy Western celebrities, internationally renown stars of the Arab world, among others. Entertainment alone will reportedly cost $3 million and, as fun lil’ party favors, the couple will hand out Rolex watches — each priced at $10K.

Wissam is going all out for his future wife, and they both seem very dedicated to one another, but sources say that Janet is already preparing for a very different lifestyle. “The lifestyle that Janet has with Wissam is a far cry from the celebrity culture that she’s accustomed to, where she was idolized and was seen as a powerful woman,” noted the source. Right now, Janet is living a double life. While in the United States and Europe, she still plucks her eyebrows and wears hair extensions. But when she’s visiting Wissam’s family in the Middle East, she doesn’t put on makeup or hair extensions, and she wears tra­ditional Muslim clothing. It seems as if Janet has lost all sense of her old self. She is madly in love with Wissam, and willing to do almost any­thing to make him happy.”

What do you think about Janet Jackson’s wedding plan and new lifestyle? Let us know in the comments below. Or, if you’re a bit skeptical on the report, let us know why! Is Janet Jackson Muslim now?

Note: the above picture was taken back in July when the couple vacationed in Porto Cervo, Sardinia.