Report: The Bachelorette Emily Maynard Being Conned By Producers 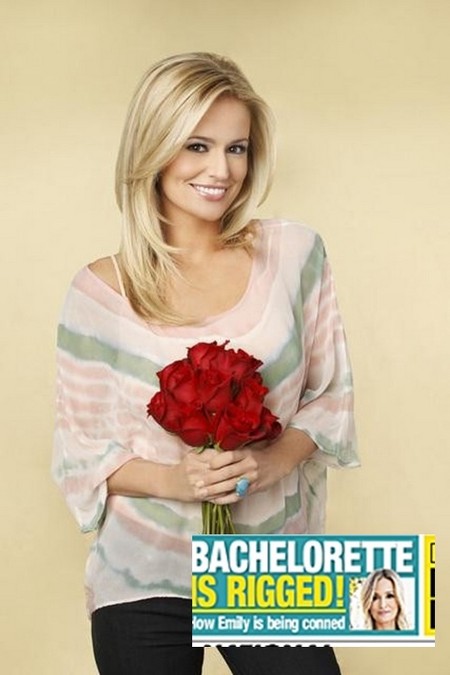 The current issue of National Enquirer features the cover story ‘The Bachelorette is rigged.’  The magazine claims that new Bachelorette contestants Emily Maynard is being conned by producers to manipulate ratings.  Reportedly when the hiring was done for the reality show the producers made sure to find bachelors for Emily that would fit into the mold they wanted and tug at Emily’s heartstrings.  The producers main goal was to manipulate the viewers so they would keep coming back.

The magazine goes on to claim that Kalon McMahon who is one of the men vying for Emily’s heart is a big fake.  According to the magazine Kalon who made his grand entrance in a helicopter and is advertised as a wealthy  Luxury Brand Consultant is really broke as a joke.

“A close relative of contestant Kalon McMahon, told The ENQUIRER exclusively that the handsome Texan was recruited by producers because he fit their mold.  Turns out he’s not ready to settle down and has lots of other girlfriends.  McMahon’s grandmother Joelle Rogers also says producers beefed up Kalon’s bio, making him appear to be wealthy when he has “about as much money as the homeless guys I give $5 to every time I drive down the street in Houston.”

If this was not enough the magazine also found out that Arie Luyendyk Jr. was chosen as a contestant because he is a race car driver like Emily’s former fiance, who died in a car crash.  They hoped Arie would tug at her heart strings and cause a lot of drama and tears this season.

The Bachelorette premiered this week and both Kalon and Arie made it through the rose ceremony.  If you missed the show you can read our full and detailed recap here.  What do you think, are producers of The Bachelorette callous enough to try and manipulate ratings?  Is Emily Maynard being conned by producers?  Hit the comments and let us know your thoughts!