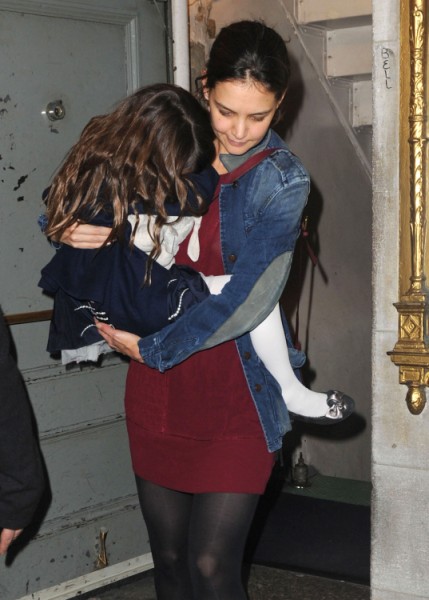 Tom Cruise and Katie Holmes seemed to have the co-parenting thing down. Katie kept Suri and Tom stayed away and sued people who called him out on it. But now we’re hearing Suri and Katie are spending the holidays with Tom Cruise in Telluride like they’ve done in the past. Is Tom attempting to woo Katie back or is he just trying to give Suri a normal first Christmas post-divorce? How in the hell did he ever get Katie to agree to this?

“Tom and Katie are determined to show Suri that they’re still friends and devoted parents,” a source told OK! magazine. “They know it will mean so much for her, and both are happy to swallow their pride to make sure she has a fun holiday. Thanksgiving has always been a really big deal for them.”

I’m sure marriage was a big deal for them too but they had the good sense to get rid of that. For Katie’s sake I hope this isn’t true. This would be the first holiday season she gets to spend with her family again. Why would she ever negotiate out of that? Why would Tom even want it? I thought he and Katie couldn’t even stand to be in the same room together? Tom’s been in London for over two months! Perhaps this is the gift he gets for keeping his distance while Katie and Suri acclimated to NYC? That’s one hell of a gift. Maybe Tom only wanted Suri but Katie threw down the law that they were a package deal. That’s a little annoying to me. Katie chose to marry a crazy man and then chose to divorce him. Divorce isn’t easy. You have to split holidays. Tom might be coocoo for cocoa puffs but he’s still entitled to spend time with his daughter – alone. But who knows? Maybe this was a mutual decision. Maybe Tom and Katie have buried the hatchet and are determined to work together. Bruce and Demi did it. Why not Tom and Katie?

Is Tom Cruise forcing Katie to stay with him over the holidays, you think, or are they only thinking about Suri’s happiness? Or is OK! magazine completely full of shit because there’s no way Katie’s traveling out to the middle of the Colorado mountains with him alone? Have you seen The Shining?!