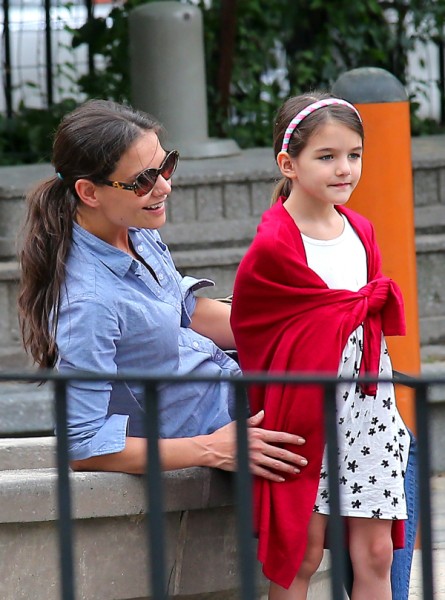 So… is it going on three months since Tom Cruise last saw Suri Cruise in person in NYC? It was mid-July when Tom swooped in to take Suri to Chelsea Piers and fly her around in his helicopter. Then he left and the abandonment accusations started rolling in and then he freaked out and threatened to sue Life & Style over its awesome cover. And now Frankenstorm Hurricane Sandy just finished wiping its ass with NYC. Katie Holmes and Suri were in the thick of things (meaning they lost power along with everyone else and had to leave their home for a safer place to hide out). Is a hurricane exciting for a six-year-old or frightening? I’d like to think it would have been fun since she probably wasn’t told about the truly scary situations. But two questions still arise: Why did Katie keep Suri with her when she could have easily told Tom to come and take her away until everything calmed down? And where the hell is Tom Cruise?

Last time I heard Tom was still working/partying it up in London. Again, it’s like a six hour flight between London and NYC…. Do you like to think Tom was all about coming to Suri’s rescue but Katie wanted Suri with her instead? Tom LOVES to come to the rescue. Remember how visible he was after 9/11 when he started his detoxification program for the fire fighters? Scientology to the rescue! Where is he now? Other big-named actors like Ben Stiller and even crotchety Alec Baldwin are working in soup kitchens and being all good Samaritan and Tom is nowhere to be seen. What gives? Did he turn his back on NYC the second Katie made it her safe haven?

Maybe I’m overreacting. New Yorkers tough things out and Katie and Suri are very much New Yorkers now. Katie’s play is opening Monday night and Suri has to get back to school which is why leaving the city was probably not an option. I’m sure Tom skyped since that’s how his lawyers like to defend the deadbeat dad allegations. It’s just getting weirder and weirder. Why won’t he come and see Suri? Why is it easier to sue a tabloid than it is to just visit your daughter and shut everyone up? If a monster hurricane wasn’t important enough, what is?

What do you think? Did Tom Cruise abandon Suri?