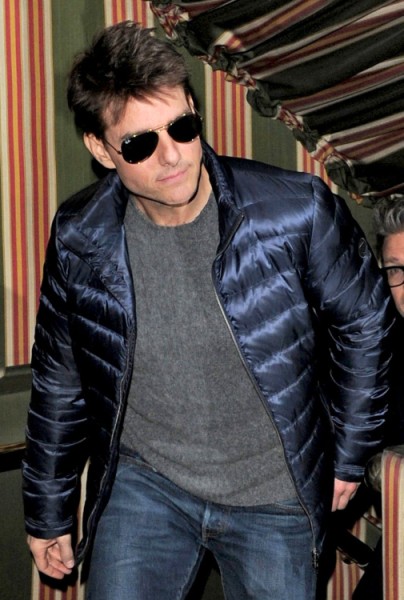 Tom Cruise partied with ANOTHER mystery women in trendy London nightclub Annabels last night. Oh ya, Tara Reid was there too. I don’t think I want to live in a world where there are clubs that allow Tara Reid to be in the same room with Tom Cruise. He may be crazy but he’s still one of the most famous stars in the world.

No one knows for sure if they hit it off. Tara was there to cheer on American Pie co-star Thomas Ian Nicholas – you know, the kid in Rookie of the Year. Apparently he has a band and it played in London last night. So I’ve got no pictures that show Tom and Tara actually together but we can only dream! One thing is for certain though, being snapped at a nightclub that Tara Reid stumbles out of is never good for the image. You’re just guilty by association!

Tom’s had a busy European summer vacation, no? He’s currently in London hitting on Cameron Diaz and filming his new Jack Reacher film but I found out today he hasn’t seen Suri Cruise in over a month. I know he takes filming seriously but isn’t that a bit much especially since the flight from London to NYC is only seven hours at most? What’s the deal Tom? Are you having some kind of mid-life crisis, some sort of existential dilemma?

I don’t fault Tom for going out and having a good time. He might be crazy but he got his heart smashed this summer by Katie Holmes and is probably still reeling. He can have some superstar time and let the ladies flutter around him. He looks good right now and maybe he’s auditioning wives, who knows? I just think it’s odd that he’s been away from Suri so long. I know he needs to work but… does he really? He has tons of money! Hollywood women take time away from their careers to raise their children all the time (see also: Natalie Portman). Why doesn’t Tom think to do the same? Maybe Katie asked him to stay away so Suri could get acclimated to school? What dirt does she have on him??? Or is Tom nursing a broken heart and hiding out because it’s just too hard to be around his ex-family? That’s the sweet version and the one I’d like to stick with but Tom’s not sweet. He’s a Scientologist! Are the labels mutually exclusive?