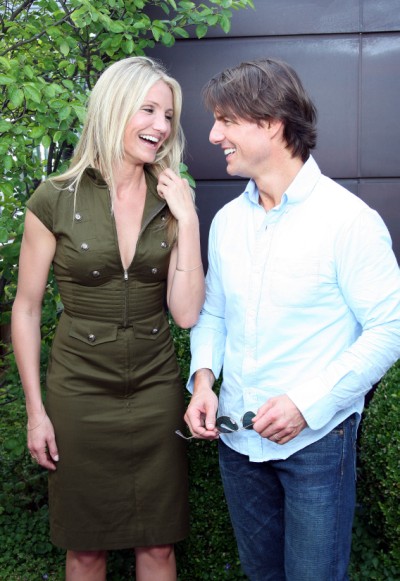 Tom Cruise dropped by Cameron Diaz’s 40th birthday in London and sources say the mood was just right for the former co-stars. Apparently, there were “sparks” between Tom and Cameron and one of her “pals” spilled she wouldn’t be surprised if the friends finally tried to make a relationship happen.

OK, before you stop reading, hear me out! I love this idea! Tom has said he wants someone with Nicole Kidman-type power. Cammy is a straight up A-lister. Tom would have to get new lifts for his sneakers but he’s all about committing to his relationships. And Cameron always picks douches! Matt Dillon, Jared Leto, Justin Timberlake and Alex Rodriguez did my girl wrong! She needs a little bit of right. Now would Tommy probably try to indoctrinate her to Scientology? Well, that’s a given. Would he have her spied on and probably followed by his minions? Of course. But he’d also treat her like gold and probably be entertaining as hell!

Nazanin Boniadi aside, I think a lot of people in the industry think Tom is a good dude. He obviously has his friends. I heard about the date Life & Style is trying to make happen and I think Penelope Cruz and Javier Bardem showed up as well. Vanilla Sky reunion! How bad ass is it that those four can hook up and be totally cool with each other? Anyway, Cam is obviously a friend. She tried to help him out by co-starring in that disastrous Knight and Day movie so she’s good people. Would she take one for the team for him now? This is the first time in a long time (maybe ever) they’ve been single at the same time. If ever Tommy needed a friend, it’s now. Tom could use Cameron (in the nicest way possible) like he did Penelope. Date her for a couple years, convince the world he’s not bat sh-t crazy and then move on to an impressionable youth. Cameron has talked recently of wanting a baby sooner or later. Say what you want about Tom, but he’s got good genes. Their baby would be gorgeous AND tall and don’t tell me Tom doesn’t think about those things.

So I’m all for this. I’m really rooting for it actually. It would be so fun to watch!

Do you think Cameron would agree to be Tom’s girlfriend to revamp his image? Can you think of anyone better?