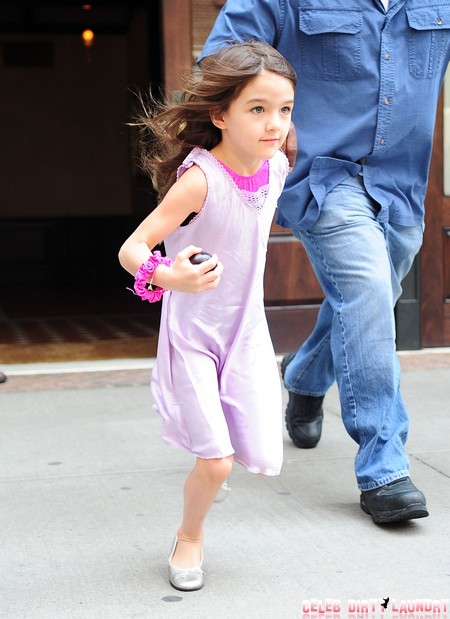 Tom Cruise is furious and heading back to court. Tom is suing Life & Style magazine and In Touch Magazine (owned by Bauer Publishing) over cover stories regarding his relationship with Suri Cruise. Tom is asking for a modest $50 million from the publications over two cover stories. The first is from the July 30 cover story in Life & Style entitled “SURI IN TEARS, ABANDONED BY HER DAD.”The second article is the Oct. 1 cover story from In Touch called “ABANDONED BY DADDY.”

Both covers show pictures of Suri crying and looking very unhappy. Tom’s lawyer Bert Fields said “Tom is a caring father who dearly loves Suri.  She’s a vital part of his life and always will be. To say he has ‘abandoned’ her is a vicious lie. To say it in lurid headlines with a tearful picture of Suri is reprehensible. Tom doesn’t go around suing people.  He’s not a litigious guy.  But when these sleaze peddlers try to make money with disgusting lies about his relationship with his child, you bet he’s going to sue. These serial defamers are foreign owned companies with their global headquarters in Hamburg. They take money from unsuspecting Americans by selling their malicious garbage. Having to pay a libel judgment may slow them down”.

Tom is no stranger to controversy and gossip. Many articles have been written over the course of his career about his relationship with the Church of Scientology, his sexuality and his marriages. Over the summer there were a lot of articles regarding Tom, his ex-wife Katie Holmes and Suri following his divorce.

The Los Angeles Times is reporting that Bert Fields sent a letter to American Media (the parent company of The National Enquirer) over a story depicting Tom as a monster.

Right now there are only pictures of Suri with her mother, Tom not having been photographed with her in quite a while. Being that Tom is a big star with a history of strange behavior I can see how he would be a target. I feel that Tom is bat crap crazy but I want to give him some credit. I don’t for a minute believe he would abandon Suri. Many articles and pictures regarding Suri and Tom’s relationship show him as a doting dad who spoils her rotten.

After the divorce there were reports of Tom talking to Suri on the phone every day.  He travels a lot for work and it must be really hard to arrange time together. If you factor in that Suri is now in a regular school and on a schedule their time together could further get pushed back. If I were Tom I would want to make them pay, too. This is a horrible allegation for any parent to face.  What do you think?  Is Tom  a bad dad?  Let us know in the comments below!