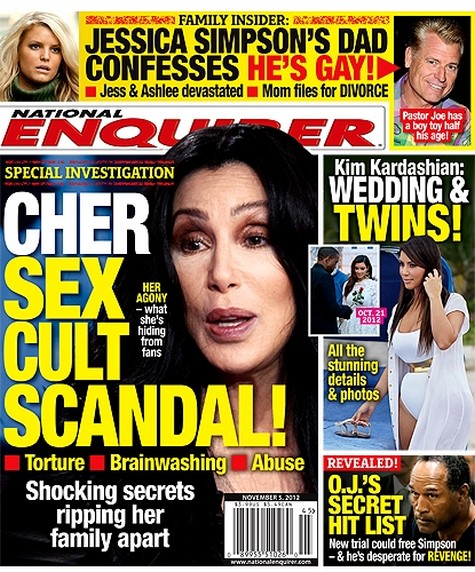 The current issue of the National Enquirer features the cover story “Cher’s Sex Cult Scandal.”  In an explosive story and a special investigation the magazine claims to have all the details of the 66-year-old Cher’s agony and what she is hiding from fans.   They are about to reveal the shocking secrets that are ripping her family apart.   A gasp…..sex cult scandal.  The scandal according to the magazine includes: torture; brainwashing and abuse.

Why do I think this scandal has more to do with her son Chaz and not her.   Chaz has been very open about his ten year battle with drugs and alcohol abuse that included crazy behavior and wicked hallucinations, and those close to him say that he has been in rough shape since going through a painful split last year.  So perhaps it is Chaz the magazine is speaking about and not Cher.  You can be sure we will be picking up our copy this week to find out all the details.

Also included in this week’s issue NE has managed to get their hands on O.J.’s secret hit list.    A Nevada judge agreed Friday to reopen the armed robbery and kidnapping case against O.J. Simpson to determine if the former football star should get a new trial.  O.J. is hoping the new trial will free him and he is desperate to get revenge on the people responsible for putting him behind bars.

Reports are surfacing that the former Baptist minister recently came out to his family and his overdue confession is the real reason why Tina Simpson filed for a divorce after 34 years last September.  “Joe got the family together about two months ago and came out of the closet,” an insider told the National Enquirer. “He told them that he’d tried to continue in his marriage to Tina, but he couldn’t go on any longer and deny the fact that he had these feelings for men. Joe said it wasn’t fair to her, and it wasn’t fair to him.”

To find out the details about Cher’s sex cult scandal and more, pick up the current issue of National Enquirer on stands now.