Get A Look Inside Tom Cruise’s House Of Horrors (Photo) 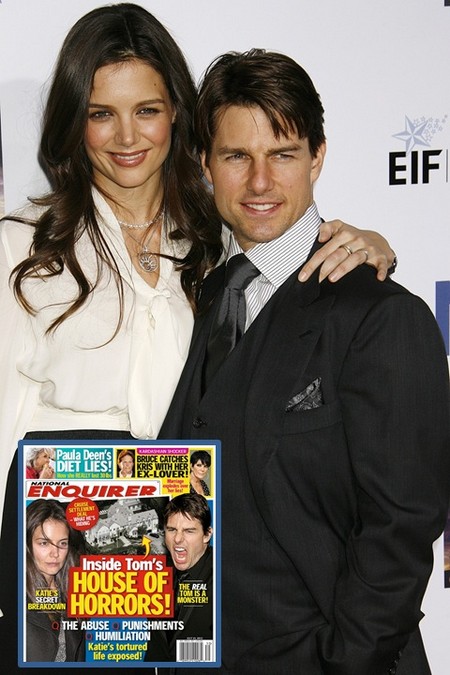 Katie Holmes was essentially a helpless prisoner inside Tom Cruise‘s Church of Scientology inspired house of horrors!  The situation was similar to that in macabre horror film except that this was real life – poor Katie’s real life. Until she got up the courage and mustered the support of lawyers, family, and friends Katie was subjected to abuse, punishments and humiliation as she led a ‘tortured existence.’

Do these revelations surprise you? They shouldn’t because they come from The National Enquirer cover on the July 23rd edition! The Enquirer would have us believe that Katie, whose primary residence has been New York City for the past couple of years, and who lives a privileged and luxurious lifestyle, was forced to suffer abuse at Tom’s hands. The Enquirer promises to expose that ‘The Real Tom Is A Monster.’ I have already suggested that Katie is a famewhore, who married Tom for what he could do for her and nothing I have seen since has changed my mind.

There is not a shred of evidence that Katie is anything other than a dissatisfied wife looking to advance her own career and keep her daughter out of the clutches of Scientology. Not that that is so unusual or strange, but it doesn’t make Tom a monster. Tom is a fanatical Scientologist – something Katie knew perfectly well when she got pregnant and then married him. Let’s not pretend that Katie was somehow trapped by Tom and his evil fellow Scientologists and forced to endure a miserable existence. Tom is crazy, we admit it – while Katie is opportunistic, tired of Tom, and doesn’t want Suri to become a freak like her father – that’s it and that’s all. Ask yourself this question – would YOU have married Tom Cruise and had his baby???

The Enquirer cover also exposes Paula Deen’s Diet Lies – telling us how she really lost 30 pounds. Most celebrity endorsed diets are scams – why would Paula’s be better. It’s not like she is known for her integrity anyway.

In my mind the best story on the cover, and the one that is closest to the truth, is that Bruce Jenner catches wife Kris Jenner hooking up with one of her ex-lovers and throws a hairy canary. Now that I can believe – Kris is a self-proclaimed slut and announced this on Jay Leno – and has a history of cheating on everyone always.

We will explore these stories and others in detail when we pick up our print edition of The National Enquirer. Tune in later in the week for more fun and games.