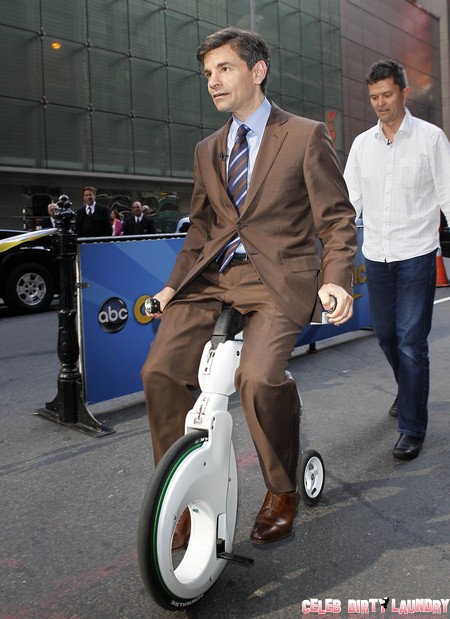 It seems that Good Morning America woke up on the wrong side of the bed and the mood amongst the cast on the popular morning show is ugly and getting uglier.  The dispute, which centers around co-host George Stephanopoulos and news anchor Josh Elliott, is polarizing the entire GMA team.  George is growing worried about the increasing popularity of the more charismatic and much better looking Josh.  President Bill Clinton’s former White House Communications Director fears that Josh is being groomed to take over his job.

It seems that George’s friends on GMA are leaking reports that Josh behaves like a diva is ‘acting like a brat’ off camera.  Just as GMA is beginning to overtake its arch competitor, Today, for number one spot in the morning show ratings war the growing rift between George and Josh threatens to ruin everything.  A published report claims that Josh’s behavior off camera is totally toxic.  This nasty leaked ‘news’ is an example of how far George’s people are prepared to go – just to make his rival look bad.

The National Enquirer Print Edition, September 3rd tells the tale:  Insiders say GMA – which is celebrating its climb to most popular morning show – has been split into rival factions.  “It’s becoming a Team Josh versus a Team George situation on Good Morning America,” the source said.

The bad blood began after Elliot, 41, left his job on ESPN in May 2011 and became a viewer favorite on GMA.  Now Stephanopoulos, 51, believes the 6-foot-3 hunk is being groomed to take his place in the co-host’s seat, a source said.  It’s no wonder the nerdy 5-foot-6 political expert Stephanopoulos is worried.  Elliot is a decade younger, has male model good looks and a magnetic humor-laced personality.

“George understands he’s always been a strange fit to be host of a morning program that interviews celebrities and has a lot of light-hearted segments, while Josh seems like he was born for the job,” says the source.  Adds another source, “So far, Josh is doing very, very well.  It grates on George that everyone looks at Josh as the golden boy.”

What do you make of this report?  Are you are fan of the show?  Can you sense any underlying hostility between George and Josh when you watch GMA?  Does George have reason to fear that his brains and sharp tongue will lose out to Josh’s charm and good looks?  Let us know what you think in the comments below.