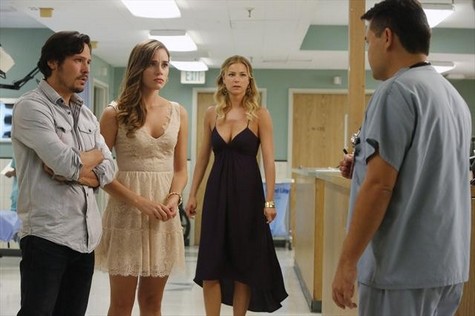 Tonight on ABC a whole-new episode of REVENGE airs called “Intuition.” On tonight’s show playing with the Graysons is definitely playing with fire, and Amanda learns that the hard way. Did you watch last week’s episode? We did and we recapped it here for you!

On tonight’s show Emily is determined to find her Mom.  She really wants to use her father’s forged journals to make Victoria talk about what happened to her mother.  Playing with the Graysons is definitely playing with fire, and Amanda learns that the hard way. Meanwhile Emily and Aiden each get blindsided, and the wheels start turning as Daniel begins to take matters into his own hands.

Tonight’s Revenge episode 4 is going to be exciting, and you won’t want to miss. So be sure to tune in for our live coverage of Revenge — tonight at 9PM EST! While you wait for our recap, hit the comments and let us know how excited you are about the new season of the Revenge? Check out a Sneak peek video and photos of tonight’s episode below!

Tonight’s episode begins on the beach with Emily and Aiden discussing her mother. She believes that he has located her and Emily is desperate to locate her whereabouts once and for all.  Victoria and Conrad are sitting together over brunch discussing how dangerous it is to be tangled with the initiative once again. Charlotte joins them and Victoria pumps her for info about the journal that was placed into Amanda’s hands. Emily (apparently) forged it, unbeknownst to them. Charlotte refuses to tell her what is inside the pages so Victoria calls Amanda and invites her over- with the journal, of course.

Amanda arrives with an ear piece so that Emily can coach her on what to say to Victoria. She reads passages from the forged journals and uses them to try and get more info about her mother out of Victoria. It’s an unsuccessful venture that is interrupted by Charlotte. Victoria tells her they were discussing an impromptu baby shower scheduled for the next day.

Daniel decides to come clean and tell Ashley what has gone on in the family, with Conrad’s plotting. He tells her he has a plan. Originally Emily had Amanda turn down Victoria’s offer to buy the journals. She has since changed her mind which baffles Amanda, who doesn’t want Victoria’s money. Emily explains that they need her signature so to ask for a check. Emily arrives at the baby shower before Amanda strides in with a few of her friends from “the club”. Of course Victoria and her friends chuckle at Amanda’s low class style.

Kara is taken at gun point and insists that Gordon was not the horrible man that is being described to her. She eventually tricks her captor, by giving him files and as he reaches down to pick them up she crosses the room, grabs a gun and shoots him in the neck. It’s a tranquilizer of some kind that gives Kara time to tie up her assailant while trying to figure out if he’s working for the Initiative or the Graysons.

Daniel has really wised up to the people around him because After Ashley ducks out of the office he grabs her phone and checks her voice mail. Of course there is a message from Conrad telling Ashley to call him if she has anything more on Daniel.

Victoria gives Amanda a baby gift- a journal with a check in it for a houndred grand. The two duck out to talk and they end up upstairs. Amanda presses to know about her mother and Victoria cracks and tells her that her father lied to protect her. They didn’t want her to know that her father tried to kill her. Victoria takes a step towards Amanda and she backs up just far enough to tumble over the railing and lands sprawled on the floor in the entranceway. Emily has watched the whole interaction down to the last 20 seconds runs to help Amanda.

As Kara’s assailant is working his way out of her place she is driving and hears on the radio of Amanda’s accident. Emily calls Jack and tells him to get to the hospital. Once there the doctor informs Jack and Emily that the baby is losing oxygen and needs to be delivered immediately but that will put Amanda at extreme risk because she has already lost too much blood. The doctor asks who to save if he can only help one of them and Emily tells him to save the baby. Amanda had told her while being put in the ambulance to make sure they help the baby first.  The doctor later tells them that Amanda is in a coma and the baby is in NICU. Jack, Charlotte and Amanda are all a mess. Tune in next week to see if Amanda pulls through!