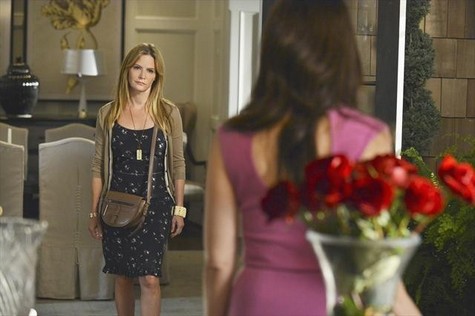 Tonight on ABC a whole-new episode of REVENGE airs called “Forgivemess.” On tonight’s show Emily breaks down and tells Aiden about a memory she suppressed of Kara drowning her as a child, but then Aiden drops a bigger bombshell of his own about something she has to know about her mother. Did you watch last week’s episode? We did and we recapped it here for you!

On last week’s show Emily was determined to find her Mom. She really wanted to use her father’s forged journals to make Victoria talk about what happened to her mother. Playing with the Graysons was definitely playing with fire, and Amanda learned the hard way. Meanwhile Emily and Aiden each got blindsided, and the wheels started turning as Daniel began to take matters into his own hands.

On tonight’s show faces from the past are reemerging all around the Hamptons, and for Victoria and Emily it brings on different kinds of trouble and significance. Meanwhile Jack’s sense of duty grows exponentially, and Padma makes a move that could have major ramifications for Nolcorp.

Tonight’s Revenge episode 5 is going to be exciting, and you won’t want to miss. So be sure to tune in for our live coverage of Revenge — tonight at 9PM EST! While you wait for our recap, hit the comments and let us know how excited you are about the new season of the Revenge? Check out a Sneak peek video and photos of tonight’s episode below!

Tonight’s show continues the storyline momentum that last week’s episode left us hanging with. Emily has a vivid dream of Kara attempting to drown a very young Amanda until Conrad runs into the lake and pulls out the girl. Emily also learns that Gordon was in fact married to Kara. Just as Em is coming to these realizations Kara decides to come out of the shadows and pays a visit to Victoria’s home. She actually hugs Victoria and says she is so happy to find her alive.

Grayson is meeting with Aiden, being told that his business is a huge risk when Victoria calls him flipping out because Kara has shown up one day after Amanda’s devastating fall over the banister, in heels while pregnant.  Nolan visits with Jack who is at the hospital holding vigil with his prematurely born son (that looks like a three month old). The two discuss how Amanda is doing- which is as well as you’d expect someone in a coma to be.

Nolan finally catches up with Emily and slyly lets it drop that he’s hurt that she didn’t support him through the death of his father. After Em feigns sadness at not being there for him they go back to discussing the Grayson’s and watching live house footage where Conrad and Victoria invite Kara to stay with them. It’ll keep the off kilter woman safe, or at least that’s what they’re claiming.

Hmmm. Amanda was in a coma at the end of the last episode but now she is cuddling her son in a hospital bed when Emily comes in to talk to her. Em apologizes for putting her in such a bad position but that she did find her mother so it wasn’t for nothing.

Victoria and Kara have a real heart to heart and as it turns out when Kara was married to David, Victoria was his side dish. Of course Kara was stuffed in a nut bin and Victoria was told she was dead, but she still technically was the other woman. It’s a fact that Kara loves throwing in her face. Kara then heads to the hospital where she takes baby Carl from Emily. As they briefly talk a man named Mason introduces himself to Kara, clearly knowing her. He then proclaims that he loves the Hamptons.  He also asks Kara why she allowed her daughter Amanda to think she’s dead for two decades. Kara doesn’t answer before Emily asks Mason to leave. Amanda doesn’t recognize Kara and so Emily offers to drive her home.

Amanda is staying with Emily for her first few days home from the hospital. Emily tells Amanda about the dream of a little girl being nearly drowned by her mother. Emily says the girl was her but in the flashbacks David calls the little girl Amanda so I’m not sure what’s going on at all here.

Mason lands on Victoria’s doorstep to dig for info about Kara. Apparently he and Victoria go way back and he wants to know why Victoria spent years swearing that Kara was dead. She tells him that she fears Kara will bring them all down.

Victoria storms into Conrad’s study carrying a cell phone that belongs to Kara. The only number in it is Gordon’s and of course they realize she has been feeding him information. Conrad asks Victoria to be his wife again so that they can’t testify against each other in court.

Emily decides to come clean and tell Amanda that Jack really is her baby’s father. She apologizes for lying and then later meets up with Kara on the beach as Mason approaches Amanda. He tells her that she is many things but Kara’s daughter is not one of them, then he drops a folder beside her. Tune in next week to find out what’s inside!