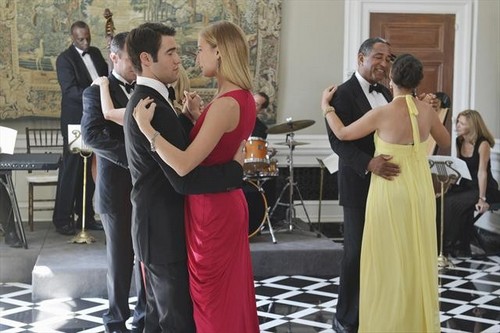 Tonight on ABC a whole-new episode of REVENGE airs called “Illusion.” On tonight’s show The ties that bind Victoria and Conrad are tested. Did you watch last week’s episode? We did and we recapped it here for you!

On last week’s show faces from the past were reemerging all around the Hamptons, and for Victoria and Emily it brought on different kinds of trouble and significance. Meanwhile Jack’s sense of duty grew exponentially, and Padma made a move that could have major ramifications for Nolcorp.

On tonight’s show the ties that bind Victoria and Conrad are tested as they reaffirm their loyalties and commitment to each other. Meanwhile the all-too-knowing Mason Treadwell digs deeper as Emily and Amanda struggle to keep their pasts a secret.

Most of the episode is going to be about the wedding of Conrad and Victoria. They decide to marry so they wouldn’t have to testify against each other, but they make it look like they’re doing it for love. Charlotte won’t be at her parents’ fake wedding because she doesn’t want to be a part of it.

Tonight’s Revenge episode 6 is going to be exciting, and you won’t want to miss. So be sure to tune in for our live coverage of Revenge — tonight at 9PM EST! While you wait for our recap, hit the comments and let us know how excited you are about the new season of the Revenge? Check out a Sneak peek video and photos of tonight’s episode below!

Tonight’s episode begins with Conrad and Victoria getting ready for their wedding. Conrad is having his suit fitted while talking business. At the same time we cut to Emily and Amanda getting their details straight. Mason is already onto the fact that Amanda is not Kara’s biological child because she is missing an obvious scar. Emily needs to grill her on important details so that she remembers them.  Kara contemplates leaving the Grayson’s home as Victoria plans her wedding to Conrad and Victoria convinces her to stay. You know the old thing of keeping your enemies closer? It’s definitely at play here.

Amanda meets up with Mason to provide him with fake proof that her scar was removed. They then have a nice chat about how quickly everyone believes the nonsense that Victoria feeds to anyone that will listen.  Victoria is getting ready for her wedding and Charlotte informs her that she’s not taking part in her wedding. She tells both Victoria and Conrad that she won’t fake happiness for yet another of their PR stunts.

Aiden and Emily make quite an entrance at Victoria and Conrad’s ceremony. Daniel in particular is a bit disturbed to see his ex with this guy. Meanwhile Mason goes poking around at Gordon’s trailer and finds him a bit dead, with cuff links on the floor near him with an engraved “CG” on them. You know, Conrad Grayson.

Victoria is greeted before the ceremony by Conrad. He is carrying a small box, an early wedding gift. Of course what’s inside isn’t the least bit conventional- it’s a gun. They later share their first dance as a married couple (again) and Conrad wants to whisk her away but she tells him she’d rather wake up at home the next day.  Meanwhile detectives are ripping apart the Grayson home and it looks like an arrest warrant is about to be issued for Conrad.

Daniel gets a spin on the dance floor with Emily and grills her on if she ever thinks about how life would be if they had stayed together. Their conversation is interrupted by Conrad being arrested and hauled out of his own wedding reception. Nolan grabs Emily and tells her how clever it was to set Conrad up.

Daniel calls Aiden and tells him that he wants to gather the board for a vote of no confidence against his father ASAP.  Kara corners Victoria on Gordon’s murder because shortly before he was found dead Victoria assured her that he’d never hurt either of them. Kara is having flashback’s to her good times with Gordon and is clearly about to slide off the slippery slope as she walks towards Victoria.

Jack sits down on the boat and takes some time to talk to Amanda. He gets down on one knee and proposes to her for real. Of course she tells him she’ll marry him.

Victoria hears footsteps in her bedroom and raises her gun as Conrad strolls in. He struck a deal with the Initiative to get out of jail on bail. He tells her he’ll never know what he agreed to until it’s over with. The show closes tonight with Aiden trying to convince Emily that he has changed. She asks him to leave and he reassures her that he’s not giving up.  Tune in next week for more Revenge!