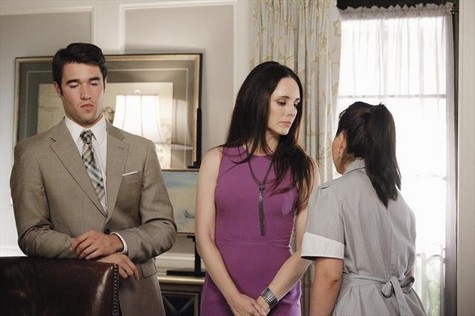 Tonight on ABC a whole-new episode of REVENGE airs called “Penance.” On tonight’s show Emily’s past comes under scrutiny. Did you watch last week’s episode? We did and we recapped it here for you!

On last week’s show the ties that boundVictoria and Conrad were tested as they reaffirmed their loyalties and commitment to each other. Meanwhile the all-too-knowing Mason Treadwell dug deeper as Emily and Amanda struggled to keep their pasts a secret.  Most of the episode was going to be about the wedding of Conrad and Victoria. They decided to marry so they wouldn’t have to testify against each other, but they made it look like they’re doing it for love. Charlotte wouldn’t be at her parents’ fake wedding because she didn’t want to be a part of it.

On tonight’s show things get complicated as Mason Treadwell delves further into Emily’s past while Kara begins to unravel, putting the Graysons in her crosshairs.

Tonight’s Revenge episode 7 is going to be exciting, and you won’t want to miss. So be sure to tune in for our live coverage of Revenge — tonight at 9PM EST! While you wait for our recap, hit the comments and let us know how excited you are about the new season of the Revenge? Check out a Sneak peek video and photos of tonight’s episode below!

Tonight’s episode begins with Mason paying Emily a visit. As usual he is looking for info and up to know good. He presents Em with an old photo of her and Amanda together in juvenile hall. He suggests they have known each other for years, intimately of course.  Mason then calls Amanda and insinuates that Emily gave him details on their sordid past. This guy is bound and determined to play everyone against each other for information.

Victoria and Conrad are up to their usual tricks and intend to drag everyone to hell with them.

Amanda and Jack sit down for an intimate dinner to find two big boxes with black bows inside. Hers has a vintage looking dress while his has a hat with the word “best” written across it. They are directed to go to a certain location in the items.

Emily meets with Amanda and directs her to call Mason and threaten him with a restraining order if he ever contacts her again. Meanwhile Aiden summons Nolan and demand information on Em’s money and David Clark’s investments. Nolan believes that he is protecting Emily and hands over an original check to Aiden. Aiden makes a phone call to Daniel and tells him that it’s time to take over the company.

Amanda returns to the boat to find Mason waiting, not for her but for Jack. Amanda decides to talk to Mason and paint a crazy picture of Emily. Elsewhere Charlotte is trying on clothes when a woman in black leather pants slinks in and leaves her a box with a black bow. In it is the perfect party dress with an address to wear it to.

Nolan heads back to Emily and tells her about the check.  He also worries that she’s not okay watching Kara, her mother leave town. While they’re talking Jack calls to see if Em has Mason’s phone number.  He needs to get Amanda home to watch the baby and knows that she’s with him. Emily goes to get Amanda and sends her home right as Amanda is about to bash Mason over the head. Emily tells him he’s a fool because the girl that left isn’t even Amanda Clark. Mason quickly realizes that Emily is in fact the real Amanda. She tells him that she counted on him to tell the real story about her father and he failed. She tells Mason that he is responsible for everything that he is. Not long after the police burst in and arrest him for Gordon’s murder.

Emily makes Mason catch up with Kara but the plan goes wrong because Mason isn’t playing along. Instead he tells the unstable Kara things to push her off the deep end. She storms off heading for the Grayson’s and she’s out for blood.  She gets both Victoria and Conrad at gunpoint and orders them into the dressing room off their bedroom. Emily is using her surveillance to try and figure out where Kara has taken the Grayson’s. Finally she directs Aiden to go to their bedroom because that camera has been disabled. He grabs Kara and chloroforms her just as she’s about to kill Victoria and Grayson execution style.

Charlotte, Deckland, Amanda and Jack arrive all dressed up at the address that they were given. It turns out to be a huge warehouse bash being thrown by Nolan.

Emily meets with Mason in jail and tries to strike a deal. She will exonerate him as soon as he writes her life story, the real one. The episode ends with Victoria wanting to tell Conrad that his son is about to ruin his business, until he stops her. He tells her everything can wait til morning.