Review: The X-Factor USA Season 2 Episode 3 ‘Auditions’ – a Panda, a Diamond and a Citizen? (Video) 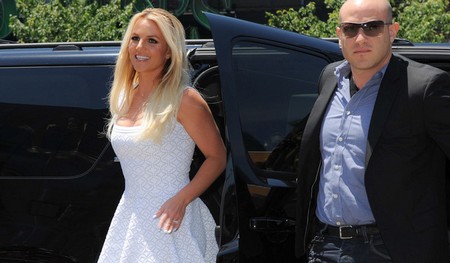 It’s that time of the week again, when Celeb Dirty Laundry brings you a full X-Factor review and performance recap, including scores and critique. It was a talented night, with a few hits and misses by the judges. The stand-outs came in the form Diamond White and Panda Ross. Read below for a full review of the performances.

The first contestant of the night was the 18-year -old blonde haired rapper from Kansas City, Rizzloe Jones. During his on-stage interview with the judges, he had a confidently quirky appeal and said that he has had the X-Factor since he learned the ABC and the letter X. In true judging-a-book-by-cover fashion, Rizzloe revealed to the unsuspecting audience and judging panel that he was going to do a self-written freestyle rap. This is never a good choice, unless you’re Chris Rene or Astro. However, Rizzloe delivered an explosive rap-infused boom, and not only had the audience on their feet, but had the judges also bobbing their heads like those toy dogs in the back window of cars that were popular in the late 90’s. His performance was electrifying, fast paced and refreshing. The judging panel gave Rizzloe 4 out of 4. We were just as surprised, so we’re giving our boy Rizzloe from Kansas City a thrilling 4 out of 4 for one of the hottest rap performances on the show thus far.

The much hyped CeCe Frey was the next contestant to try to win over the judging panel and the interim Louis Walsh from UK X-Factor. This face-painted Kansas City gal did a rendition of one of the greatest songs ever written, “Unchained Melody” by Righteous Brothers. Do any of these contestants know the intricate technicality which is required to pull off a song like Unchained Melody? One has to have a strong upper register to properly sing the controlled falsettos which made this song so iconic back in the day. One also has to have a massive range to dip into the lower crescendos and pull the song from the depths of emotion. CeCe’s rendition of this popular song was karaoke and below average at best.

Her “untrained” voice was not able to deliver on-pitch vocals and handle the strong notes at the opening verse of the song. Not only that, but CeCe’s leopard printed face and hot looks did not mingle with the nostalgia of Unchained Melody – it came across as a contrived and drunken line dancer. Demi Lovato stopped her halfway through her performance and told her about this “confusing” get-up. CeCe switched over to “Ain’t No Other Man” by Christina Aguilera – a song which requires just as strong vocals and controlled runs. CeCe’s opening runs left us hanging when she dipped into the lower register of Christina’s song, but sparks of brilliance came when CeCe whipped her hair and bounced across the stage like an alcoholic stripper. We don’t think CeCe’s voice had the control, the strength and the tone to pull off the gravelly quirks which made this song a Christina anthem. Louis Walsh and Britney Spears called her talented. Did we watch the same show? Ambition can only take you that far. The judging panel gave CeCe 4 out of 4. We are giving her 1 out of 4 for the average vocals and karaoke performance.

The 39-year-old tattoo faced Vino Alan’s rendition of “Trouble” was bluesy, gritty and held a controlled vibrato throughout. His performance was poignant and his vocals captivated the judges. We doubt this type of performance would kick Vino into the final four, but it was more than good enough to have made him go through to the next stage. The judges gave him 4 out of 4 and we agree, 4 out of 4!

The highest praise of the night went to Tate Stevens, a 37-year-old sincere and funny country dude who did a rendition of “Anything Goes” by Randy Howser. His vocals had an extremely beautiful tone to them and his performance stayed true to its country roots. Tate’s honest storytelling gave us the goosies. L.A. Reid told Tate that he was the best they had seen so far and the judges gave him 4 out of 4. We agree L.A., country music dislike or not, Tate was so amazing, so 4 out of 4 from CDL!

Citizen, the first “boy band” act since Emblem 3, took to the stage with their rendition of “Don’t Let Go” by En Vogue. This looks-obsessed 5 piece boy group came across as synchronized in their performance, especially their clichéd finger clicking opening scene. Their opening runs were reminiscent of a defunct boy band from the early 90’s, when each member turned around and “Yeeeaaah’ed” in a close-eyed wannabe N’Sync manner. Oh God, then the popping and the hopping commenced… Were these 5 dudes “serious” about this audition? Their vocals were off-pitch and their hand movements resembled a parody of a boy band on Saturday Night Live. Britney and Demi died inside from excitement, while Simon Cowell died inside from boredom. The judging panel gave Citizen 3 out of 4, with the exception of Simon who absolutely hated the performance. We’re giving Citizen 0 out of 4 (Our lowest score yet).

The aptly named Diamond White, a 13-year-old struggling teenager, was the next contestant to try out for the biggest record deal on the planet. Diamond did a rendition of “It’s A Man’s World” by James Brown and boy, did she blow the roof off the X-Factor arena… For the first time in quite a few seasons of Idol and X-Factor, we were actually irritated with Simon’s bitch face when Diamond giggled. Dude, she’s a freaking kid, stop being a fart face! Diamond delivered one of the most infectious and soulful performances of the night. Diamond did not just sing, but channeled the spirit of Etta James and Betty Jean Newsome – two of the greatest performers of all time. The iconic song, which was labeled as “biblically chauvinistic” by Rolling Stone Magazine in 1966, reverberated with a naivety and sincerity when Diamond hit the big notes. There was a mature gospel touch to the song, which made this one of our favourite performances to date. The judges gave her 4 out of 4. We’re giving her 10 out of 10! Diamond, that was exquisite!

The most memorable performance of the night came in the form of Panda Ross, a 40-year-old woman with an infectious attitude and stellar vocals. She did a rendition of “Bring It On Home To Me” by Sam Cooke. Her performance was strong, over-the-top and OMG. Breaking the fourth wall here, but the people reading this might not know that Sam Cooke is my favourite male musician of the 60’s. Panda Ross, you beauty! The judging panel gave her 4 out of 4. We’re giving her a standing O and a 4 out of 4!

The last memorable contestant of the night was the beautiful Jessica Espinoza who did a rendition of “Nobody Knows” by Pink. Her vocal tone was intensely emotional and very Kelly Clarkson (they look alike). Jessica hit the chorus with a deep and dimly lit tone which merely accentuated and articulated her performance. The judging panel gave her 4 out of 4. We did too.

What did you think CDL readers? Was this episode better than the previous two? Do you envision a permanent future for X-Factor? Are you over it? Let us know your thoughts in the comments below.