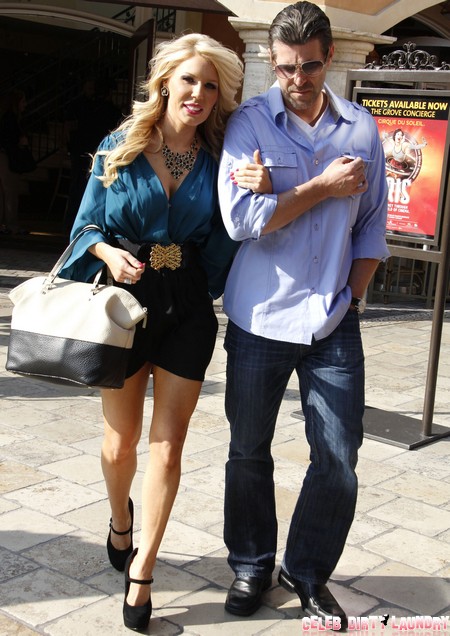 This week The Real Housewives’ of Orange County’s Gretchen Rossi disclosed that she had Bulimia, an eating disorder that affects millions each and every year. She battled with the eating disorder while navigating through high school and thankfully decided that she needed to get herself healthy by the time she was in college.  The still super fit star spoke to Celebuzz recently about her diet and workout habits and its there that she made the disclosure,

“I grew up playing soccer and softball, and was a cheerleader. So, I’ve always been extremely athletic. As far as taking my health to the next level, though, it was actually in high school, because I suffered from an eating disorder. When I finally decided I wanted to get healthy and educated about how to stay in shape, I went and got my personal training certificate. I started training other people in college, which really helped me get past my own issues, because I was able to help people in that way.

Now, I’m totally capable of knowing how to take care of myself on my own. Now, I do everything in moderation. If I feel like I really want a pasta dinner, I’ll have my pasta dinner, but I won’t eat the entire thing. Or, if I want an ice cream sandwich one night, I’ll make sure to be stricter with my diet the next couple days. I’ve realized that when I deprive myself of something that I’m craving, I’ll just want it more and more. Then, I’ll end up binging on something that I didn’t need to if I would’ve allowed myself to have little bits and pieces in the first place.”

It’s great that Gretchen is not only healthy now, but willing to speak out to women that may be suffering from an eating disorder. She’s in a position to set a positive example and to this point we have seen her fail ridiculously in that department.  Gretchen is very likable but she seems to gravitate towards bottom of the barrel men and then tries to turn them into something redeemable.

She has spent 3 years now with live in love, Slade Smiley and quite frankly, she should have left him in the dumpster she found him in.  Not only is Slade a deadbeat dad, but Gretchen has paid his child support for him to keep him out of jail.  His primary job seems to be supporting her career while she pays all the bills and makes the money. People go through rough patches but Slades’ is a lifestyle choice, supported by Gretchen.

If Gretchen can overcome something as potentially life threatening as an eating disorder then there’s no reason for her to settle for something as life ruining as a gold digging boyfriend.  Can she overcome her lousy taste in men?  Tell us your thoughts in the comments below!