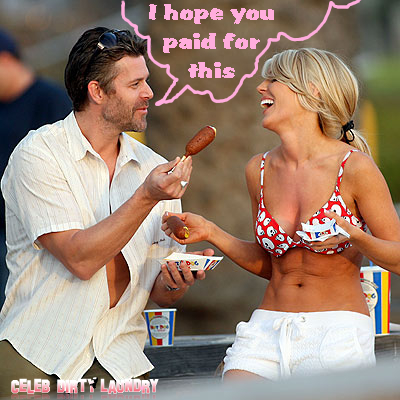 Maybe Real Housewives of Orange County star Gretchen Rossi is finally close to kicking deadbeat boyfriend Slade Smiley to the curb once and for all, because she’s sick of paying his way!  If you’ve watched five minutes of Real Housewives of Orange County, then you already know that Rossi pays for herself and admits to paying her man’s debts as well.

They’ve been together for years but I’m pretty sure the only job title that Slade Smiley has held in that time is professional leech.  Looks like all is not well when the Bravo cameras stop rolling.

“Gretchen is growing tired of taking care of Slade and paying for everything in his life and she’s just about had it,” a source close to the blonde bombshell told RadarOnline.com.  “She is supporting him and helping to pay his legal bills and it’s getting to be too much for her. Gretchen is seriously considering ending the relationship because she’s sick of doing everything for Slade.  Gretchen is publicly supporting Slade and continues to defend him and their crumbling relationship, but behind the scenes she’s admitting to friends that she’s not happy doing what she’s doing with him.

I’ve never really understood why she is with this guy — what does she see in him? It is painfully obvious that he is using her for all she’s worth and claims that helping her succeed is his job.  They’ve both admitted that she has even paid his child support for him!  Can you understand what it is that keeps Rossi with this man?  Tell us in the comments below!