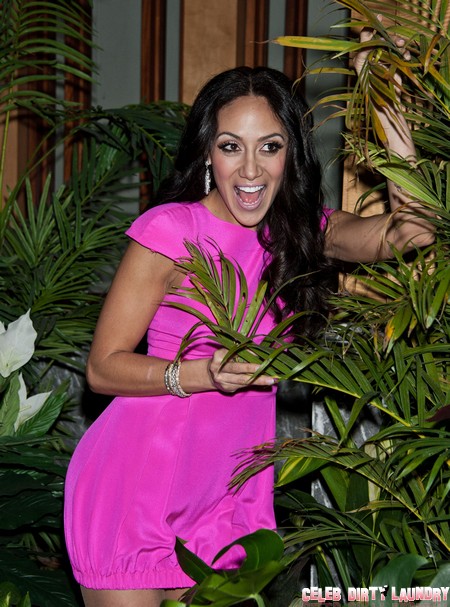 There was an epic battle brewing on last night’s episode of The Real Housewives of New Jersey and viewers will get to see it completely unfold and explode over the next two weeks. Teresa Giudice had visited Allure Salon to get her makeup done before the Posche Fashion Show and while there, a grenade was dropped in her lap. The salon manager, Angelo, claims to know Tre’s sister-in-law, Melissa Gorga.  He says that she used to dance for him at a gentlemen’s club several years ago. In the moment, Teresa shut the conversation right down. She told him not to discuss her family in front of her like that and he started to emphatically apologize.

Fast forward a few hours to the fashion show, when all of the housewives are seated together at a table. Along comes Angelo and he has the balls to not only approach Melissa, but to interrupt the conversation to talk to her. Melissa plays nice and is friendly as he keeps asking her if she remembers him. After he leaves, Melissa says he looks familiar but she can’t figure out where it is that she knows him from. Teresa watches the whole exchange with some serious intensity. Next week’s episode is when the ugliness begins.

Melissa and her husband Joe Gorga believe that Teresa set up the whole exchange. They believe that she directed an obliging Angelo to approach Melissa in front of everyone. The reunion show is just two weeks away and one of the (not so) secrets that has leaked out already is the fact that the Giudice’s and Gorga’s haven’t spoken for a year and this whole stripper thing is the reason. According to a source,

Perhaps Teresa’s denials would be a bit more believable if she didn’t have such a lousy track record. She is on the outs with the entire cast because she intentionally sets out to cause hurt and damage whenever an opportunity arises. Angelo threw her the grenade but I’m betting Teresa pulled the pin herself and set up that meeting.  She constantly says she wants no drama but the crazy chick can’t help but cause it with every step she takes.

Melissa may have danced, ok she probably did but isn’t that kind of ancient history by now? Aren’t these ladies all sleazy in one way or another anyway?  Would you really trust any of them with your deepest secrets?  Tell us your thoughts on the family feud in the comments below!