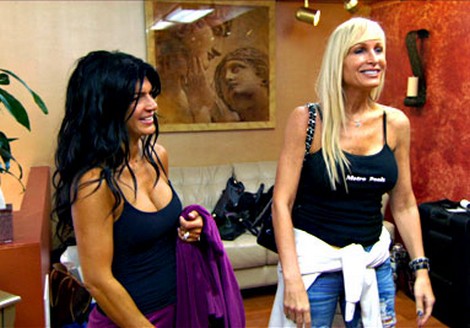 Tonight on Bravo is an all new episode of the Real Housewives of New Jersey called “A Bald Canary Sings”. On tonight’s the drama that left two families not speaking for the past year slowly unravels…Melissa meets with a hot-shot music industry insider to see if she has the makings of a pop star. Later on, it’s time for Kim D’s annual Posche Fashion Show.   If you missed last week’s show called “Dinasty of Denial.”  there is a full and detailed recap HERE for you!

Last time we saw our house housewives the ladies formed new alliances after their return from the West Coast. The Gorgas left Napa early to show their support of Teresa, but Melissa hoped to calm the wake that Teresa left behind by asking Caroline to forgive her cantankerous sister-in-law. While Kathy went to college for a day with her daughter Victoria, Caroline got her crack at being an oracle on Sirius Radio.

On tonight’s show Kathy attempts to make a sweet business deal while Melissa meets with a music industry hot-shot to see if she has the makings of a rock star. Fashion fever grips Jersey as it’s time for Kim D’s annual Posche Fashion Show. Before the models, a ghost from Melissa’s past comes down the runway and Teresa makes a shocking discovery that sets the stage for drama to come. As always, the show can’t go on without a little drama beforehand, and a ghost from Melissa’s past sets the stage for the drama to come.

Tonight’s episode is going to be filled with the usual Housewife drama and you won’t want to miss it, so be sure to tune in for our live coverage of the show tonight at 10 PM EST! While you wait for our recap hit the comments and let us know what you think of “The Real Housewives of New Jersey” season 4 so far! Also we have a sneak peek video of tonight’s episode “A Bald Canary Sings” below!

Tonight’s episode begins with Melissa getting ready to meet with a record producer when her phone rings. On the other end is Kim D. from Posche Boutique. Apparently the two ladies have been on the outs because Kim spread vicious rumors about Melissa’s husband Joe and his supposedly crooked business dealings. Kim apologizes for sticking her nose where it didn’t belong and then invites her to be a guest at her upcoming fashion show. Melissa admits to being very pissed at her and tells her she’ll at least think about going.

Over at the Giudice’s version of a palace, both Teresa and Joe are trying to teach their four girls Italian. Teresa has written the words “Italian Lesson” on a piece of paper and I truly hope that her Italian spelling is better than English because “Lesson” proves to be a very tricky word for the jersey princess. Milania, one of the Giudices’ young daughters is already proving to have quite a mouth on her. She’s starting to follow in big sister Gia’s footsteps. In other words, both kids need some serious discipline but will likely never get it! In the middle of the lesson, Kim D. drops in on the family and invites Teresa to her fashion show.

It looks like Albie’s girlfriend, Lindsey, is throwing down the gauntlet and trying to prove herself to mama bear, Caroline. She actually invites the Manzo parents over for breakfast that she has prepared herself. Caroline sucks it up as she sees her son slipping out from beneath her thumb.

Melissa and Joe do lunch with a few music producers to see what route she should take towards really establishing her singing career. She seems to want to fly below the radar rather than attach herself to a huge label.

Kim D also invites Caroline and Jacqueline to her fashion show as they stop to shop in her boutique.  Caroline worries about attending because it’s a show that always seems to end in disaster. Jacqueline goes to try on a dress and then complains like crazy about being too bloated to wear it. Have you noticed Jacqueline has some real body issues going on here? Every week there is a weight reference falling from her mouth.

Teresa, Melissa and Jacqueline decide to get together at Teresa’s for a playmate. Teresa and Melissa feel like they need to make up for lost time and even though Jacqueline and Teresa have kind of made up, the whole thing is awkward. Or Jacqueline is making it awkward by playing on the swing set and being antisocial.

Kim D. takes Teresa to Allure Salon with her and while there they meet salon manager, Angelo.  He drops the grenade in Teresa’s lap that he knows Melissa, she used to dance for him years ago. I’m impressed because Teresa shut the conversation right down and told Angelo not to talk about her family. She is shaken up by the information and is visibly upset. Angelo does mention that the guys hated to see Melissa leave the business. She was good at what she did apparently.

The ladies are all seated together for the Posche Fashion Show. Teresa’s eyes roll as Caroline sits down and you know it’s going to get ugly. Jacqueline also thinks Teresa is holding a grudge against her.

Out of nowhere, Angelo strolls up to the table and says hello to Melissa. He asks how she has been etc and she acts like she knows him but after the fact says she can’t quite place him. Of course this is where the episode ends, with a gigantic TO BE CONTINUED scrawled across the screen. Tune in next Sunday because from the snippet they just showed, it’s going to get ugly fast and everyone will be dragged into it!