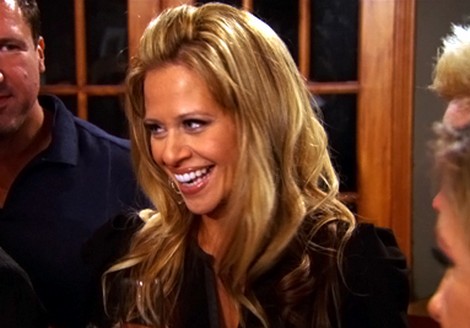 Tonight on Bravo is an all new episode of the Real Housewives of New Jersey called “Dinasty of Denial.” On tonight’s episode it’s back to the east coast for the NJ ladies, and new alliances emerge post-Napacation. The Gorgas left Napa early to support of Teresa, and it’s Melissa who tries to calm the stormy seas between Teresa and Caroline..  If you missed last week’s show called “Hot Tub of Sour Grapes” there is a full and detailed recap HERE for you!

Last time we saw our house housewives temperatures were not the only thing rising as the Housewives rounded out their California trip with a relaxing dip in the hot tub. Tempers flared when Caroline overheard a conversation between Teresa and Kathy. In one last blowout between Teresa and Caroline, it looked as though some friendships are just beyond repair.

On tonight’s show the ladies form new alliances after their return from the west coast. The Gorgas left Napa early to show their support of Teresa, but now Melissa hopes to calm the wake that Teresa left behind by asking Caroline to forgive her cantankerous sister-in-law. While Kathy goes to college for a day with her daughter Victoria, Caroline gets her crack at being an oracle on Sirius Radio.

In the end, it’s not just Teresa’s new alcoholic beverage that’s fizzing, when she invites her longtime ally and sister of the enemy, Dina, to her Fabellini release party.

Tonight’s episode is going to be filled with the usual Housewife drama and you won’t want to miss it, so be sure to tune in for our live coverage of the show tonight at 10 PM EST! While you wait for our recap hit the comments and let us know what you think of “The Real Housewives of New Jersey” season 4 so far! Also we have a sneak peek video of tonight’s episode “Dinasty of Denial” below!

The show starts with Melissa. It’s the first day of school for her kids. The family is having pancakes with fake butter from a tub. Melissa tells Joe she was tring to stay out of the drama on their Napa trip. Melissa feels bad that she didn’t say goodbye to Jacqueline. Teresa and her husband Joe talk about the attack Caroline launched last episode. Joe says that he doesn’t care about her at all. Teresa bad mouths her personal life and Joe tells her to shut up because it’s not her business.

Teresa has to go to Kathy’s house to pick up some shoes she forgot. She addresses the cheating/divorce rumours, and promises that if Joe cheated, she would break his legs and leave him. Kathy is worried that Victoria won’t get into college. Rich, her husband, says they’ve babied her too long, and that she can’t even do her own laundry. Kathy is worried that Victoria is going to move too far away, but Rich is looking forward to some alone time with his wife.

Melissa asks Jacqueline if she was pretending to sleep during the fight in Napa. Both agree that the fight wasn’t theirs to participate in and that it is better to just butt out than add fuel to the fire. Teresa goes to Kathy’s to pick up her shoes. Kathy calls her out for being left out of the toast in Napa, and says she felt really excluded by Teresa. Teresa says she felt ambushed. At Jacquline’s, Melissa says Caroline looked really hurt after the fight. Jacquiline thinks an apology wouldn’t undo anything and that their relationship is absolutely dead.

Jacqueline hasn’t heard from Teresa since they all got back from California and doubts if their truce/forgiveness is real. Melissa visits Caroline, who is planning a special on Sirius radio. Her segment is focusing on friendship: how and when to end one, specifically. Melissa says she thinks they’ll move past it, but Caroline says it won’t happen. Melissa compares it to high school girls. Caroline says she isn’t going to let people beat her up emotionally.

Teresa’s launch party for her new bellini night is tonight, and Melissa has offered to watch her kids (who are also nieces, as Melissa is married to Teresa’s brother). Kathy and Victoria go to the University of Maryland for a tour. They are all underwhelmed by the demo dorm room, which Kathy compares to a prison cell. The closets are, however, too small.

Melissa and Teresa’s girls bond over manis and pedis. Melissa tells the girls that they will always have each other, and buys them matching bracelets (which is a really sweet gesture!). In Washington DC, Rich starts lecturing his kids on the opportunity they have. Victoria says that seeing the college was a “woah” moment.

Caroline heads into the studio to do her Sirius gig. She admits that she doesn’t understand why people are drawn to her (Author’s Note: I feel absolutely no pull to anything she has said, or will ever, say). At Teresa’s Fabellini launch party, the alcohol is flowing and the hostess has a huge pink fuzzy shawl. Jacqueline is hurt that she wasn’t invited to the party. Teresa says, “Jacqueline hurted me [sic]” which is why she wasn’t invited.

Caroline, very awkwardly, opens up her Sirius show. Her family member’s don’t respond when she introduces their names, and no one seems to call to talk about family with her. Can’t imagine why! Dina shows up to Teresa’s party, which Jacqueline finds super confusing. Teresa says she can always count on Dina. Teresa tells her about the last night of their vacation and Dina says that blood isn’t always thicker than water.

Caroline finally gets a call, which interrupts her dull and adjective-less list of generalized problems they faced on their vacation. Caroline tells another caller that her family is crazy. She says she blames Teresa for the drama in her life. Dina laughs at her sister, Caroline, after hearing that she told Teresa she didn’t want to be friends. She asks if they’re in grade school. Teresa recognizes that the problems Caroline has with her aren’t anything she can control, and Dina encourages her to let it go and focus on her kids and health. She says that holding on to anger makes you ugly.