Rick Ross Crushing On Rihanna So He Loses Weight 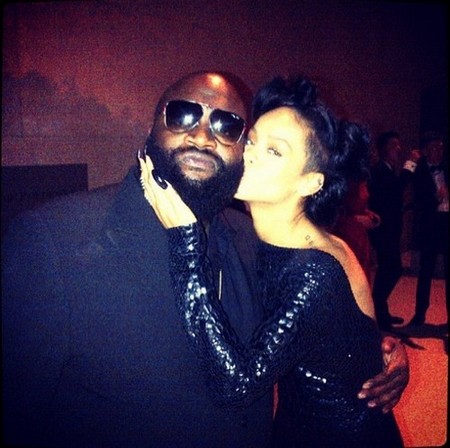 Hip Hop artist Rick Ross is losing the weight and it looks like his prime motivation now is his crush on Rihanna.  Good going!  He had lap band surgery which is kind of like a gastric bypass surgery.  This makes a person satisfied with eating less.  He did this only last year but has already lost 20 pounds – he has also added exercise and a strict diet.

People say just getting surgery is easier but I don’t think so, because first you have to heal and then start exercising.  Now could his new found enthusiasm come from the major kiss our sweet little Rhianna (LOL) planted on him at the Met Gala.  Mr. Ross you know if you hook up with this chica you are going to have to keep your strength up.

This is a little new to people but they have known each other for quite a while.  He was on her remix for, “Talk That Talk” with Jay-Z and also her single “Rude Boy”, so it’s not like he’s a random guy hook up if this happens.

So all this spur for dieting and working out could be motivated by trying to start something with her.  Mr. Ross is a very nice likable bobocito and he’s stable, so do I think he could calm our wild child down a bit, absolutely.  Do I think she’ll be calmed down to a true quietness – absolutely not!  But if this progresses it should be fun to watch.  Keep working out Mr. Ross I like your work a lot!