Rihanna And Ashton Kutcher To Have A Jewish Wedding 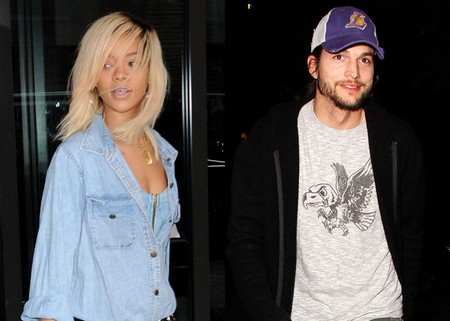 Rihanna and Ashton Kutcher have been dating for the past two months and things are getting serious between the two of them.  In fact, although neither Ashton nor Rihanna are Jewish, she is going to begin training with his rabbi.  Love conquers all and a nice Jewish wedding could very well be in the couple’s future.

As everyone now knows, Rihanna was caught making a late night booty call at Ashton’s place a few days ago and now we have learned much more…

Rihanna has been smitten with Ashton after meeting him at a party of a mutual friend in December.  Friends say Rihanna is so in love with Ashton, who split from his ex-wife Demi Moore in November after cheating on her, that she is joining his Jewish Kabbalah group.

The Sun has a source:  “The flirting began as soon as Rihanna and Ashton met and swapped numbers. That moved on to texts and arranging to meet   They snuck off to a Santa Monica hotel a few weeks ago.”

“They are two single people having a fling, so thought it would be best to meet in secret.  Rihanna has told friends he’s funny and cute.   Both of them love a good time and think they’re too busy for anything serious just yet.  She’s starting to enquire about Kabbalah sessions with his rabbi.”

“She is curious about Kabbalah so has started asking questions.  She’s open to new things and has always been a very spiritual girl.   If she and Ashton are getting really close, she wants to be able to understand it.”

Apparently Ashton had wanted to keep the romance as secret as possible in order not to upset crazy jealous Demi.  Well it’s a bit too late for that now.

Related: Demi Moore Obsessed With getting Ashton Kutcher Back

An insider revealed:   “Ashton does not want to rub a new relationship in her face. She’s still vulnerable.  He’s a good guy and, with all Demi’s recent health problems, people have forgotten that.  Do you think that Ashton and Rihanna will invite Demi to their Jewish wedding?  Demi can be the flower girl.

This is a good move for Rihanna and a step up for sure.  No matter what you think of Ashton, he is still a far better person than woman-beater Chris Brown.