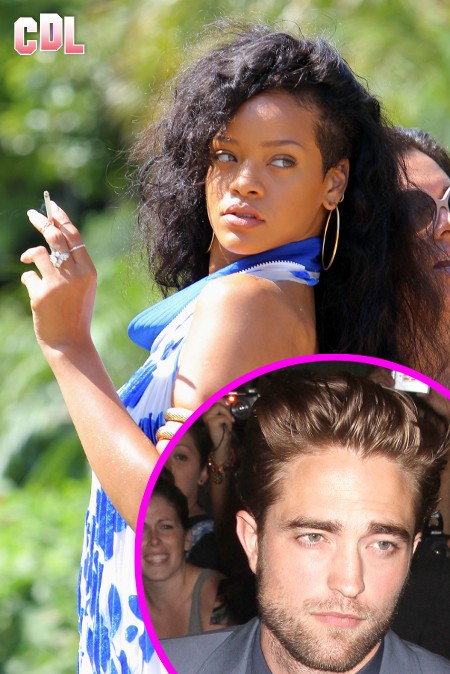 Rihanna and Robert Pattinson have been “dating” for as long as their careers have existed. For some odd reason, gossipmongers seem to cling to Ri-Ri/R-Patz like a Titanic survivor clings to warm water. However, according to a new Vogue Rihanna interview, the super auto-tuned singer says it’s bull shizz. Rihanna was backstage at last month’s MTV Video Music Awards in Los Angeles (like the rest of Hollywood) and was spotted bumping into and hugging Pattinson. The world exploded and Martians cackled into the deep of the night.

According to the writer of the Vogue article, it was revealed to Rihanna before the VMA’s that she had been romantically linked to Pattinson. “She expressed horror and pronounced it the most bulls**t ever. No two private lives in the universe are subjected to as much daily rumormongering as Rihanna’s and Pattinson’s, and watching their encounter in the hallway is like witnessing the collision of gossip planets.” The encounter in the hallway wasn’t anything like Close Encounters of the Third Kind, it was more like encountering your grandma in the hallway on her way to find a stash of diabetic chocolates, “Pattinson lowers his head and smiles, Rihanna gives him an innocent hug and pushes on. The exchange is shorter than three seconds.” Three seconds – the amount of time it takes to swallow your Prozac.