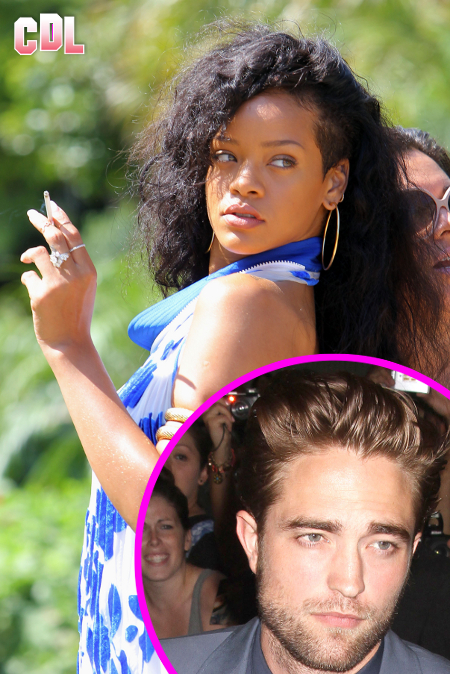 Now that Robert Pattinson is back on the market, celeb ladies from all corners of Hollywood are making their moves, including super popstar Rihanna! All of us here at Celeb Dirty Laundry were a bit surprised to hear that Rihanna might have the hots for R-Pattz, but stranger relationships have formed . . . and now we’re fearing for Robert’s life because Chris Brown probably isn’t going to take this news very well. At least, that’s our guess.

After Robert Pattinson broke up with Kristen Stewart (For good thought?), Rihanna swiped Robert’s numbers from one of her pals and has started texting him random, funny messages that supposedly are a bit sexual. “She got Rob’s phone number from a mutual friend and has been sending him sexy, funny texts to cheer him up,” a friend of Rihanna’s supposedly told OK! Magazine. “They’ve met several times at award bashes over the years. RiRi thinks he’s very cute, but nothing ever came of it because he was attached to Kristen — and it’s not her style to steal someone else’s man.”

So Rihanna might be game to try sinking her teeth into a little vampire action, but is Robert Pattinson ready for raunchy Rihanna? Apparently he thought he was being Punk’d when he received the texts, but eventually Rihanna proved to him that she was in fact the real deal. Doesn’t seem like R-Pattz is too into Ri-Ri.

“Rihanna would love to meet up with him. And Rob’s friends keep telling him he has to start enjoying life again. What better person to help cheer him up than Rihanna?”

Hmm . . . do you think Robert will branch out and go out on at least one date with Rihanna? For some reason, I don’t see this match happening. But the Celebrity Cupids have concocted stranger marriages. Guess we’ll see where the pieces land. What do you think about a potential Rihanna and Robert Pattinson hookup?